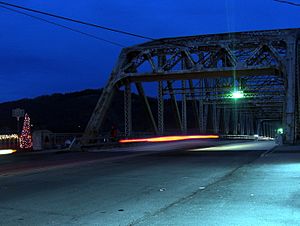 Pike County is a county located in the U.S. state of Pennsylvania. As of the 2020 census, the population was 58,535. Its county seat is Milford.

In 2006, Pike County was the fastest-growing county in the state of Pennsylvania.

Pike County was named for General Zebulon Pike. It was organized on March 26, 1814 from part of Wayne County, Pennsylvania. Some English settlement in the area had started during the colonial years.

The longtime original inhabitants were the Lenape Native Americans, known by the English colonists as the Delaware Indians because their territory was along the Delaware River (as named by the colonists), as well as the coastal mid-Atlantic area. In 1694, Governor Benjamin Fletcher of the colony of New York sent Captain Arent Schuyler to investigate claims that the French were recruiting Indian allies for use against the English. In 1696, governor Fletcher authorized purchases of Indian land near the New York border by a number of citizens of Ulster County; their descendants became the first European settlers of what became Pike County.

Nicholas Depui was the first to settle in the area, in 1725. Thomas Quick moved to the area that would become Milford in 1733. Andrew Dingman settled on the Delaware River at the future site of Dingmans Ferry in 1735. The early settlers got along well with the Lenape and traded with them. As settlement increased and their land practices encroached on Lenape uses, land disputes arose. The colonists' infamous Walking Purchase of 1737 swindled the Indians out of more than half of present-day Pike County. As they realized what had happened, violent conflicts arose between the Lenape and the colonists. 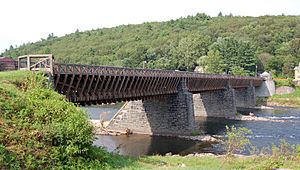 Early in the nineteenth century, coal was discovered nearby in the area that would become Carbondale. This became especially significant as the British restricted export of British coal to the United States after the War of 1812, creating a fuel shortage in rapidly expanding New York City. To get the coal to New York, developers proposed a gravity railroad from Carbondale to Honesdale, along with a canal from Honesdale to the Hudson River at Kingston.

The state of New York approved the canal proposal in 1823. Work on the 108-mile (174 km) Delaware and Hudson Canal began in 1825 and was completed in 1828. The canal system which terminated at the Hudson River near present-day Kingston, proved profitable. But, the barges had to cross the Delaware via a rope ferry across a "slackwater dam," which created bottlenecks in the canal traffic and added greatly to the cost of transportation.

John Roebling proposed continuing the canal over the river as part of an aqueduct. Built in 1848, his innovative design required only three piers, where five would ordinarily have been required; this allowed ice floes and timber rafts to pass under with less damage to the bridge. Three other suspension aqueducts were subsequently built for the canal. Roebling's Delaware Aqueduct is still standing, possibly the oldest suspension bridge in America; it has been named a National Historic Landmark.

For fifty-one years, coal flowed to New York City via the canal. But the development of railroads, which were faster, cheaper, and operated even when the canals were frozen, brought the end of the canal era. The New York and Erie Railroad supplanted the canal and in 1898 the water route was abandoned.

From 1904 to 1926, Grey Towers in the borough of Milford, Pennsylvania was the site of summer field study sessions for the Master's program of the Yale School of Forestry, together with the Forester's Hall, a commercial building that was adapted and expanded for this purpose.

In 1926, the Pennsylvania Power and Light Company built a hydroelectric plant on Wallenpaupack creek at the former village of Wilsonville. The town was evacuated and now lies under Lake Wallenpaupack, created by a dam. A crew of 2,700 men worked for two years to complete the dam for the project at a cost of $1,026,000. This required the acquisition of nearly a hundred properties, and a number of farms, barns, and homes were razed or moved. In addition, 17 miles (27 km) of roads and telephone lines were relocated, and a cemetery was moved to make way for the project.

The largely rural area of the county made it attractive as a country destination. Several camps were developed in the area of Milford, Pennsylvania, the county seat. It has several hundred late 19th and early 20th-century buildings that contribute to a National Historic District listed on the National Register of Historic Places. The Yale ran summer field studies for its Master's program in forestry there from 1904 to 1926.

Since the late 20th century, Pike County has been the fastest-growing county in Pennsylvania; between 1990 and 2000, its population increased by 65.2%, and it grew an additional 16.9% between 2000 and 2004. The area has relatively low state and county taxes, affordable housing, and Interstate 80 and Interstate 84 provide rapid commutes to New York City's northern suburbs.

The terrain rises rapidly from the river valley in the east to the rolling foothills of the Poconos in the west. The highest point is one of two unnamed hills in Greene Township that top out at approximately 2,110 feet (643 m) above sea level. The lowest elevation is approximately 340 feet (103.6 m), at the confluence of the Bushkill and the Delaware rivers. 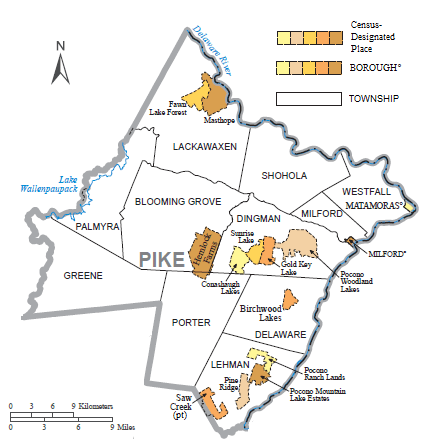 Map of Pike County with municipalities and CDPs labeled.

Under Pennsylvania law, there are four types of incorporated municipalities: cities, boroughs, townships, and, in at most two cases, towns. The following boroughs and townships are located in Pike County:

The population ranking of the following table is based on the 2010 census of Pike County. 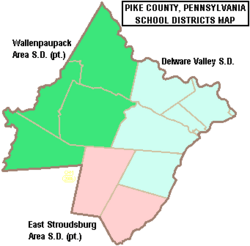 All content from Kiddle encyclopedia articles (including the article images and facts) can be freely used under Attribution-ShareAlike license, unless stated otherwise. Cite this article:
Pike County, Pennsylvania Facts for Kids. Kiddle Encyclopedia.