Kids Encyclopedia Facts
Not to be confused with Orange, New York.

Orange County is a county located in the U.S. state of New York. As of the 2010 census, the population was 372,813. The county seat is Goshen. This county was first created in 1683 and reorganized with its present boundaries in 1798.

Orange County is included in the New York-Newark-Jersey City, NY-NJ-PA Metropolitan Statistical Area. It is in the state's Mid-Hudson Region of the Hudson Valley.

The County Executive is Steve Neuhaus.

As of the 2010 census the centre of population of New York state was located in Orange County, approximately three miles west of the hamlet of Westbrookville.

Orange County was officially established on November 1, 1683, when the Province of New York was divided into twelve counties. Each of these was named to honor a member of the British royal family, and Orange County took its name from the Prince of Orange, who subsequently became King William III of England. As originally defined, Orange County included only the southern part of its present-day territory, plus all of present-day Rockland County further south. The northern part of the present-day county, beyond Moodna Creek, was then a part of neighbouring Ulster County.

At that date, the only European inhabitants of the area were a handful of Dutch colonists in present-day Rockland County, and the area of modern Orange County was entirely occupied by the native Munsee people. Due to its relatively small population, the original Orange County was not fully independent and was administered by New York County.

The first European settlers in the area of the present-day county arrived in 1685. They were a party of around twenty-five families from Scotland, led by David Toshach, the Laird of Monzievaird, and his brother-in-law Major Patrick McGregor, a former officer of the French Army. They settled in the Hudson Highlands at the place where the Moodna Creek enters the Hudson River, now known as New Windsor. In 1709, a group of German Palatine refugees settled at Newburgh. They were Protestants from a part of Germany along the Rhine that had suffered during the religious wars. Queen Anne's government arranged for passage from England of nearly 3,000 Palatines in ten ships. Many were settled along the Hudson River in work camps on property belonging to Robert Livingston. A group of Dutch and English settlers arrived at Goshen in 1712. Additional immigrants came from Ireland; they were of Scots and English descent who had been settled as planters there.

In 1798, after the American Revolutionary War, the boundaries of Orange County changed. Its southern corner was used to create the new Rockland County, and in exchange, an area to the north of the Moodna Creek was added, which had previously been in Ulster County. This caused a reorganization of the local administration, as the original county seat had been fixed at Orangetown in 1703, but this was now in Rockland County. Duties were subsequently shared between Goshen, which had been the center of government for the northern part of Orange County, and Newburgh, which played a similar role in the area transferred from Ulster County. The county court was established in 1801. It was not until 1970 that Goshen was named as the sole county seat.

Due to a boundary dispute between New York and New Jersey, the boundaries of many of the southern towns of the county were not definitively established until the 19th century. 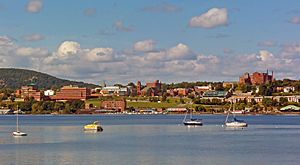 Downtown Newburgh, on the shoreline of the Hudson River.

Orange County is in southeastern New York State, directly north of the New Jersey-New York border, west of the Hudson River, east of the Delaware River and northwest of New York City. It borders the New York counties of Dutchess, Putnam, Rockland, Sullivan, Ulster, and Westchester, as well as Passaic and Sussex counties in New Jersey and Pike County in Pennsylvania.

Orange County is the only county in New York State which borders both the Hudson and Delaware Rivers.

Orange County is where the Great Valley of the Appalachians finally opens up and ends. The western corner is set off by the Shawangunk Ridge. The area along the Rockland County border (within Harriman and Bear Mountain state parks) and south of Newburgh is part of the Hudson Highlands. The land in between is the valley of the Wallkill River. In the southern portion of the county the Wallkill valley expands into a wide glacial lake bed known as the Black Dirt Region for its fertility.

The highest point is Schunemunk Mountain, at 1,664 feet (507 m) above sea level. The lowest is sea level along the Hudson.

Despite its rural roots, Orange County has been among the fastest-growing regions within the New York City Metropolitan Area. 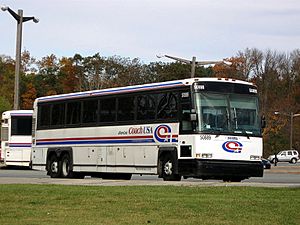 Ground transportation within Orange County is provided primarily by Leprechaun Lines, Monsey Trails, NJ Transit, Short Line Bus, and Metro-North Railroad's Port Jervis Line, as well as amenities such as senior citizen busing and car services, which usually restrict themselves to their respective town or city. 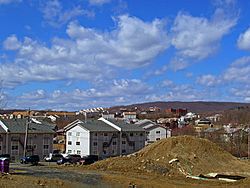 Points of interest in Orange County include the United States Military Academy at West Point; Brotherhood Winery, America's oldest winery, in Washingtonville; the birthplace of William H. Seward in Florida; the home and birthplace of Velveeta and Liederkranz Cheese in Monroe; the Harness Racing Museum & Hall of Fame in Goshen; the Times Herald-Record newspaper, the first cold press offset daily in the country, in Middletown; the Galleria at Crystal Run, in Wallkill; the Woodbury Common Premium Outlets in Monroe; and the Orange County Fair in Wallkill. The only state parks include Goosepond Mountain State Park, Harriman State Park and Sterling Forest State Park. It is also the location of Orange County Choppers, the custom motorcycle shop featured on The Discovery Channel television series American Chopper.

All content from Kiddle encyclopedia articles (including the article images and facts) can be freely used under Attribution-ShareAlike license, unless stated otherwise. Cite this article:
Orange County, New York Facts for Kids. Kiddle Encyclopedia.