Kids Encyclopedia Facts
Not to be confused with Florida, Montgomery County, New York, a town.

Florida is a village in Orange County, New York, United States. The population was 2,833 at the 2010 census estimates. It is part of the Poughkeepsie–Newburgh–Middletown, NY Metropolitan Statistical Area as well as the larger New York–Newark–Bridgeport, NY-NJ-CT-PA Combined Statistical Area. The village is located in the town of Warwick, with two small northern portions in the town of Goshen. Florida is at the convergence of Routes 17A, 25, and 94.

The current mayor is James R. Pawliczek, Sr., who was elected in March 2002. 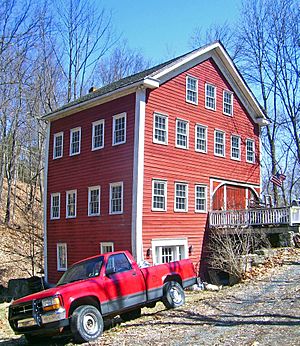 The area had been occupied by indigenous peoples for thousands of years.

The village was founded by Anglo-European colonists in 1760. It was incorporated in 1946.

Florida is in a farming area known for the vast onion fields (it calls itself the Onion Capital of the World) in the nearby Black Dirt Region.

WTBQ, Orange County's only independent radio station, was located in Florida from 1984 to 2007; the station is currently located two miles south of the Village of Warwick.

The village is west of Glenmere lake and east of Warwick, New York.

According to the United States Census Bureau, the village has a total area of 1.9 square miles (4.9 km2), all land.

There were 951 households out of which 36.1% had children under the age of 18 living with them, 59.0% were married couples living together, 11.4% had a female householder with no husband present, and 25.9% were non-families. 21.8% of all households were made up of individuals and 10.3% had someone living alone who was 65 years of age or older. The average household size was 2.70 and the average family size was 3.17.

During the 19th century, the community was settled by a wave of Polish immigrants. They followed earlier settlers who were mostly migrants from New England, arriving after the Native American population had declined.

All content from Kiddle encyclopedia articles (including the article images and facts) can be freely used under Attribution-ShareAlike license, unless stated otherwise. Cite this article:
Florida, Orange County, New York Facts for Kids. Kiddle Encyclopedia.