Ulster County is a county in the U.S. state of New York. It is situated along the Hudson River. As of the 2020 census, the population was 181,851. The county seat is Kingston. The county is named after the Irish province of Ulster. 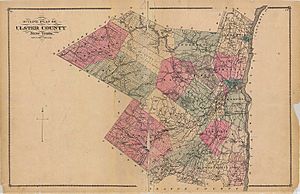 The area of present-day Ulster County was called "Esopus" by Dutch settlers: it was then part of the New Netherland Colony. In 1652, Thomas Chambers, a freeholder from the Manor of Rensselaerswyck, purchased land at Esopus and began trading there. In 1654, Johan de Hulter, owner of 20% of the Killian van Rensselaer Company was granted a patent, together with the patents of Christoffel Davids, and Jacob Jansen Stoll, this supplies evidence of the first permanent settlement, that grows into the village of Wiltwijck, later: Kingston. In 1683, the Duke of York created twelve counties in his province. Ulster County was one of them. Its boundaries at that time included the present Sullivan County, and portions of the present Delaware, Orange, and Greene Counties.

In 1777, the capital of New York State (the first state capital of independent New York) was established at Kingston, though it was subsequently moved to Kerhonkson when the British burned Kingston.

In 1797, portions of Otsego and Ulster Counties were split off to create Delaware County.

In 1798, the southernmost towns in Ulster County were moved into Orange County, to compensate Orange for breaking away the southernmost portion of that county in order to form Rockland County.

In 1800, portions of Albany and Ulster Counties were split off to create Greene County.

In 1809, Sullivan County was split off from Ulster County.

During the American Civil War volunteers were recruited from the more affluent families of the County to form the 139th New York Volunteer Infantry Regiment.

The Lake Mohonk Mountain House on Shawangunk Ridge was designated a National Historic Landmark in 1986. 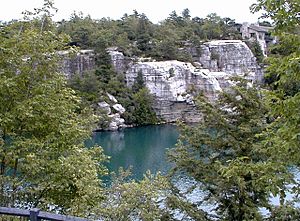 The highest point is Slide Mountain, at approximately 4,180 feet (1,270 m) above sea level. The lowest point is sea level along the Hudson River. 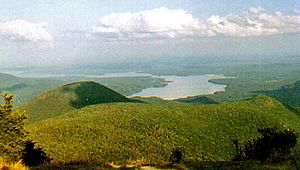 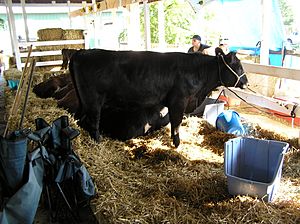 A cow at the Ulster County Fair

Ulster County contains a large part of Catskill Park and the Catskill Forest Preserve. The former Delaware and Hudson Canal brought Pennsylvania coal to Kingston on the Hudson. Former Orleans band member John Hall served in the Ulster County legislature before moving to the 19th Congressional District to run for Congress.

Ulster County has continued to be a popular vacation destination for many decades. The County is home to many outdoor landscapes, including the Catskill Mountains, the Hudson River, Minnewaska State Park, Catskill Park, Shawangunk Mountains and the Shawangunk Ridge. Each offers various recreation opportunities, including hiking, bicycling, skiing, horseback riding, kayaking, rock climbing, hunting and fishing. 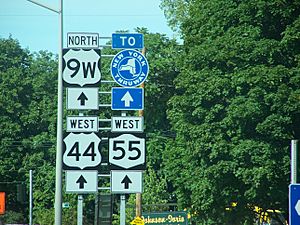 The New York State Thruway (I-87) runs north–south through the county, carrying traffic between New York City and Albany and its surroundings.

Public transportation in Ulster County is provided by Trailways of New York to and from New York City and Albany, and along Routes 28 and 32, Ulster County Area Transit on major state and U.S. road corridors in the county, and by Kingston Citibus in Kingston.

See also: Timeline of town creation in the Hudson Valley

All content from Kiddle encyclopedia articles (including the article images and facts) can be freely used under Attribution-ShareAlike license, unless stated otherwise. Cite this article:
Ulster County, New York Facts for Kids. Kiddle Encyclopedia.