Walkway over the Hudson facts for kids 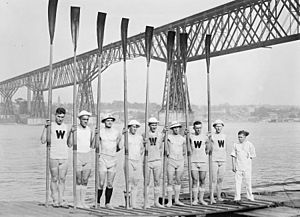 The University of Wisconsin varsity sport rowing team competing in the Intercollegiate Rowing Association regatta on June 11, 1914 at the Poughkeepsie Bridge

It was taken out of service on May 8, 1974, after it was damaged by fire. It was listed on the National Register of Historic Places in 1979, and its entry updated in 2008.

It was reopened on October 3, 2009, as a pedestrian walkway as part of the new Walkway Over the Hudson State Historic Park. The New York State Bridge Authority owns and is charged with maintaining the bridge structure (as directed by the Governor and Legislature in July 2010). The park is operated by the New York State Office of Parks, Recreation and Historic Preservation. In 2017, the walkway hosted 593,868 visitors. The park connects the Hudson Valley Rail Trail in Highland to the Dutchess Rail Trail, and forms part of the proposed Empire State Trail.

At a length of 6,768 feet, it is the world's longest pedestrian footbridge. The 4,800 foot long Mile Into the Wild Walkway in Keenesburg, Colorado is second.

All content from Kiddle encyclopedia articles (including the article images and facts) can be freely used under Attribution-ShareAlike license, unless stated otherwise. Cite this article:
Walkway over the Hudson Facts for Kids. Kiddle Encyclopedia.