Poughkeepsie (pə-KIP-see), officially the City of Poughkeepsie, is a city in the state of New York, United States, which is the county seat of Dutchess County. As of the 2010 census it had a population of 32,736. Poughkeepsie is in the Hudson Valley midway between New York City and Albany, and is part of the New York metropolitan area. The name derives from a word in the Wappinger language, roughly U-puku-ipi-sing, meaning "the reed-covered lodge by the little-water place," referring to a spring or stream feeding into the Hudson River south of the present downtown area.

Poughkeepsie is known as "The Queen City of the Hudson". It was settled in the 17th century by the Dutch and became New York's second capital shortly after the American Revolution. It was chartered as a city in 1854. Major bridges in the city include the Walkway over the Hudson, a former railroad bridge (originally called the Poughkeepsie Bridge), which re-opened as a public walkway on October 3, 2009; and the Mid-Hudson Bridge, a major thoroughfare built in 1930 that carries U.S. Route 44 (concurrent with State Route 55) over the Hudson. The city of Poughkeepsie lies in New York's 18th congressional district. 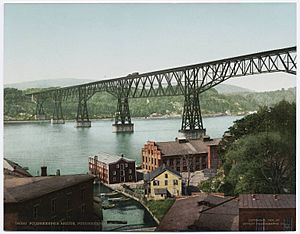 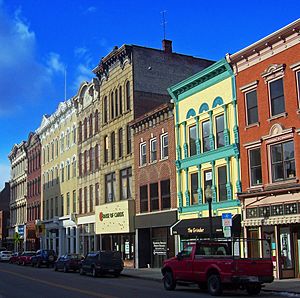 Main Mall Row, one of many Registered Historic Places in the city 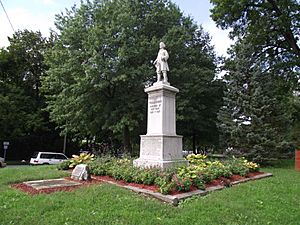 Statue of Thomas Dongan (the 2nd Earl of Limerick from 1698) in Dongan Park in Poughkeepsie, unveiled in June 1930

The site of Poughkeepsie was purchased from the Indians in 1686 by Robert Sanders, an Englishman, and Myndert Harmense Van Den Bogaerdt, a New Netherland-born Dutchman. The first settlers were the families of Barent Baltus Van Kleeck and Hendrick Jans van Oosterom. The settlement grew quickly, and the Reformed Church of Poughkeepsie was established by 1720. The community was set off from the town of Poughkeepsie when it became an incorporated village on 27 March 1799. The city of Poughkeepsie was chartered on 28 March 1854. Outside of municipal designations, the city and town of Poughkeepsie are generally viewed as a single place and are commonly referred to collectively as "Poughkeepsie", with a combined population of approximately 75,000.

Spared from battle during the American Revolution, Poughkeepsie became the second capital of New York. In 1788, the Ratification Convention for New York State, which included Alexander Hamilton, John Jay, and George Clinton, assembled at the courthouse on Market Street, debated, and ratified the United States Constitution. With its ratification, New York entered the new union as the eleventh of the original thirteen colonies to join together as the United States of America. In 1799, a new seal was created for Poughkeepsie.

Early on, Poughkeepsie was a major center for whale rendering, and during the 19th century industry flourished through shipping, hatteries, paper mills, and several breweries along the Hudson River, including some owned by Matthew Vassar, founder of Vassar College. Due to the area's natural beauty and proximity to New York City, families such as the Astors, Rogers, and Vanderbilts built palatial weekend homes nearby. The Vanderbilt mansion, located several miles up the Hudson from Poughkeepsie in the town of Hyde Park, is registered as a National Historic Site; it is considered to be a sterling example of the mansions built by American industrialists during the late 19th century. The city is home to the oldest continuously operating entertainment venue in the state, the Bardavon 1869 Opera House (see below). 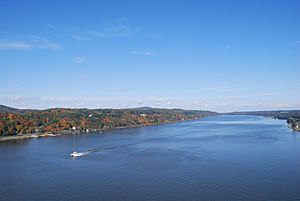 View from the Walkway over the Hudson 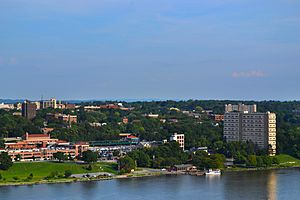 View of Poughkeepsie from the walkway

It is about 75 miles (121 km) north of New York City and is in southeastern New York State.

Poughkeepsie has a humid continental climate (Köppen Dfa) with relatively hot summers and cold winters. It receives approximately 44.12 inches (1,121 mm) of precipitation per year, much of which is delivered in the late spring and early summer. Due to its inland location, Poughkeepsie can be very cold during the winter, with temperatures dropping below zero a few times per year. Poughkeepsie can also be hit by powerful nor'easters, but usually receives significantly less snow or rain from these storms compared to locations to the south and east. 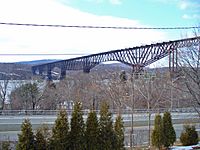 Walkway over the Hudson in Poughkeepsie 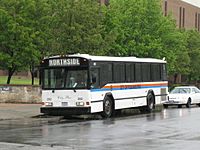 Local bus transit in the city of Poughkeepsie

Poughkeepsie sits at the junction of the north-south US 9 and east-west US 44 and NY 55 highways.

Rail commuter service to New York City is provided at the Poughkeepsie Metro-North station by the MTA's Metro-North Railroad. Poughkeepsie is the northern terminus of Metro-North's Hudson Line. Amtrak also serves the station, along the Hudson River south to New York City's Pennsylvania Station and north along the river to Albany-Rensselaer station and points further north and west. Amtrak trains serving Poughkeepsie are the Adirondack, Empire Service, the Ethan Allen Express, and the Maple Leaf. Additionally, Amtrak's New York-Chicago train, the Lake Shore Limited, the successor to the fabled 20th Century Limited, serves this station when coming eastbound from Chicago.

The Mid-Hudson Bridge, opened in 1930, carries US 44 and NY 55 across the Hudson River from Poughkeepsie to Highland. The Poughkeepsie Bridge opened in 1888 to carry railroad traffic across the Hudson, but all usage of the bridge came to an end when a 1974 fire damaged its decking. A local group (Walkway over the Hudson) raised the funds to convert the bridge into a unique linear park connecting rail trails on both sides of the Hudson River. The walkway opened on October 3, 2009, coinciding with the 400th anniversary of Henry Hudson's first exploration of the river named for him. The bridge is now open for pedestrian and bicycle use and is a state historic park. 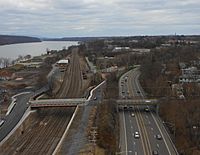 Highways and railroad tracks in Poughkeepsie

Within Poughkeepsie there are two transit bus services:

Both services have a quasi-hub at the intersection of Main and Market streets, adjacent to the Mid-Hudson Civic Center and at the west end of the former pedestrian-only Main Mall (the mall was removed in 2001, with those blocks being restored back to traffic and to the name Main Street). Other buses serving this area include Adirondack Trailways, Short Line, commuter runs to White Plains, and a shuttle to New Paltz.

The Hudson Valley Renegades are a minor league baseball team affiliated with the Tampa Bay Rays. The team is a member of the New York–Penn League, and play at Dutchess Stadium in the nearby town of Fishkill.

The Hudson Valley Hawks were a team in the National Professional Basketball League until 2009 when the league disbanded. The team's home court was at Beacon High School, located approximately 16 miles south in the city of Beacon.

The Hudson Valley Highlanders of the North American Football League played their home games at Dietz Stadium in nearby Kingston.

Poughkeepsie hosted a founding member of the North Eastern Hockey League (NEHL) with the formation of the Poughkeepsie Panthers in 2003. However, due to financial problems, the team only played for one season, and became the Connecticut Cougars the following year. The NEHL folded due financial problems in January 2008. Subsequently, the city was home to the Hudson Valley Bears, one of four founding members of the Eastern Professional Hockey League (EPHL), for one season. Both teams played their home games at the McCann Ice Arena in the Mid-Hudson Civic Center. 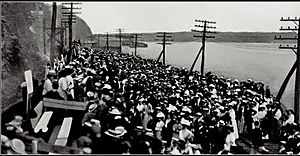 Spectators at the 1907 Poughkeepsie Regatta

One of Poughkeepsie's most notable sports events was the annual Poughkeepsie Regatta of the Intercollegiate Rowing Association (IRA), which was held on the Hudson River from 1895 to 1949. The top college teams would attend along with tens of thousands of spectators. Poughkeepsie was known as the rowing capital of the world. Spectators watched from the hills and bluffs overlooking the river and from chartered boats and trains that followed the races along the entire length of the course; which were longer than present-day races, with varsity eights rowing a 4-mile (6.4 km) race. When the IRA moved the regatta to other venues, the Mid-Hudson Rowing Association was formed to preserve rowing in the area. It successfully lobbied to preserve the regatta's facilities for use by area high schools and club rowing programs. As part of the 400th anniversary celebration of Henry Hudson's trip up the Hudson River a recreation of the regatta was held with Marist College Crew as its host. The events included a fireworks display, a large dinner, and the unveiling of the restored historic Cornell Boathouse, now property of Marist Crew. Historically accurate, the four mile long course started off Rogers Point in Hyde Park and ended about a mile south of the Poughkeepsie-Highland Railroad Bridge. Competitors included Marist, Vassar, Army, Penn, Navy, Syracuse, Columbia and Cornell. Notably this was the first time women's crew teams were allowed to participate in the historic IRA Poughkeepsie Regatta.

Established British racing team Carlin Motorsport have chosen Poughkeepsie as their U.S. base whilst racing in Indy Lights. 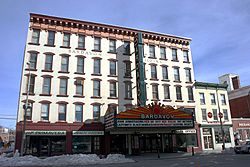 Poughkeepsie has a number of notable institutions for arts and entertainment. The Bardavon 1869 Opera House, located on Market Street just below Main Street, is a theater which has an array of music, drama, dance and film events and is the home of the Hudson Valley Philharmonic.

The Mid-Hudson Civic Center, located down the street from the Bardavon 1869 Opera House, hosts concerts, professional wrestling and trade shows and has an ice rink next door for ice hockey. From July 1984 to August 5, 1986, the Civic Center was the location for filming WWF Championship Wrestling.

The Chance, located at 6 Crannell Street in downtown Poughkeepsie, hosts live rock concerts with local as well as major artists.

The collections of the Frances Lehman Loeb Art Center at Vassar College chart the history of art from antiquity to the present and comprise over 15,000 works, including paintings, sculptures, prints and photographs.

The Barrett Art Center at 55 Noxon Street offers exhibits, classed and .lectures on the visual arts.

Locust Grove, the home of Samuel Morse and a National Historic Landmark. It features paintings by Morse, as well as historically important examples of telegraph technology.

For shopping and movie theater entertainment, the Poughkeepsie Galleria is located in the town of Poughkeepsie. The mall, which opened in 1987, consists of two floors with 250 shops and restaurants. The Regal Cinemas theater has 16 screens. Current anchor stores within the mall include Macy's, J. C. Penney, Target, Best Buy, H&M, and Sears.

The Mid-Hudson Children's Museum is located at 75 North Water Street.

The Cunneen-Hackett Arts Center at 9 and 12 Vassar Street provides venues for music, dance and the visual arts.

Bananas Comedy Club is a comedy club that presents comedians such as Jim Norton, Rich Vos, Patrice O'Neal, and Nick DiPaolo. Jimmy Fallon started his career performing at the club.

Joseph Bertolozzi's Bridge Music is a sound-art installation on the Mid-Hudson Bridge.

The Chance Theater and Mid-Hudson Civic Center ranked #4 and 5, respectively, on a list of Poughkeepsie's most Instagrammed locations in 2016.

All content from Kiddle encyclopedia articles (including the article images and facts) can be freely used under Attribution-ShareAlike license, unless stated otherwise. Cite this article:
Poughkeepsie, New York Facts for Kids. Kiddle Encyclopedia.