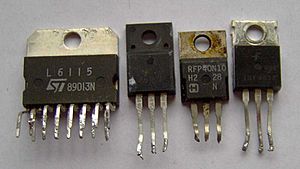 A MOSFET is an electronic component that acts as an electrically-controlled switch.

MOSFET stands for metal-oxide-semiconductor field-effect transistor. Transistors are small electrical devices that are used in, amongst other things, alarm clocks, calculators, and, perhaps most famously, computers; they are some of the most basic building blocks of modern electronics. A few MOSFETs amplify or process analog signals. Most are used in digital electronics.

MOSFETs act like valves for electricity. They have one input connection (the "gate") which is used to control the flow of electricity between two other connections (the "source" and "drain"). Said another way, the gate acts as a switch that controls the two outputs. Think of a dimmable light switch: the knob itself selects 'ON', 'OFF', or somewhere in between, controlling the brightness of the light. Think of a MOSFET in place of the light switch: the switch itself is the "gate", the "source" is the power coming into the house, and the "drain" is the light bulb.

The name MOSFET describes the structure and the function of the transistor. MOS refers to the fact that a MOSFET is built by layering metal (the "gate") on oxide (an insulator which prevents the flow of electricity) on semiconductor (the "source" and "drain"). FET describes the action of the gate on the semiconductor. An electric signal is sent to the gate, which creates an electric field that alters the connection between the "source" and "drain".

There are four common types of MOSFET:

The switch between the "source" and "drain" is usually off. You can turn the switch on by applying a positive voltage to the "gate", so it is higher voltage than the "source".

The switch between the "source" and "drain" is usually off. You can turn the switch on by applying a negative voltage to the "gate", so it is lower voltage than the "source".

The switch between the "source" and "drain" is usually on. You can turn the switch off by applying a negative voltage to the "gate", so it is lower voltage than the "source".

The switch between the "source" and "drain" is usually on. You can turn the switch off by applying a positive voltage to the "gate", so it is higher voltage than the "source".

The rest of this section is about single MOSFETs with three connections.

If the MOSFET is partly on, it will reduce the power going through it. It does that by converting some power into heat. Even if it is on, it will still convert some power to heat.

The MOSFET has a resistance. When current flows from the MOSFET's drain to it's source, there will be a voltage drop. Multiply that current and voltage to get the power loss. That lost power becomes heat.

The MOSFET must get rid of that heat, usually by passing it into the air.

Other differences between MOSFETs

There are lots of different MOSFETs available. When choosing a MOSFET, once you have decided among the 4 main types, there are lots of other things to think about. Differences between MOSFETs include: 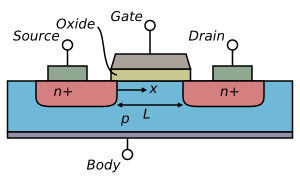 Diagram of a simple MOSFET

There are many different ways to make MOSFETs on the semiconductor. The simplest method is shown in the diagram to the right of this text. The blue part represents P-type silicon, while the red part represents N-type silicon. The intersection of the two types makes a diode. In silicon semiconductor, there is a quirk called the "Depletion Region". In doped silicon, with one part being doped N-Type, and one part being doped P-Type, a depletion region will naturally form on the intersection between the two. This is because of their acceptors and donors. P-type silicon has acceptors, also known as holes, which attract electrons towards them. The N-Type silicon has donors, or electrons, which are attracted to holes. In the border between the two, the electrons from the N-Type fill the holes in the P-type. This results in the acceptor, or P-type atoms becoming negatively charged, and since negative charges attract positive charges, acceptors, or holes, will flow towards the "junction". On the N-Type side, there is a positive charge, which results in the donors, or electrons, flowing towards the "junction." When they get there, they will be repelled by the negative charge on the other side of the junction, since alike charges repel. The same will happen on the P-Type side, the donors, or holes will be repelled by the positive area in the N type side. No electricity can flow between the two, since no electrons can move to the other side.

All content from Kiddle encyclopedia articles (including the article images and facts) can be freely used under Attribution-ShareAlike license, unless stated otherwise. Cite this article:
MOSFET Facts for Kids. Kiddle Encyclopedia.