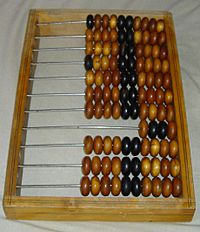 An abacus is a simple calculator.

A calculator is a machine which allows people to do math operations more easily. For example, most calculators will add, subtract, multiply, and divide. Some also do square roots, and more complex calculators can help with calculus and draw function graphs. Calculators are found everywhere. A smartphone or other computer can also act as a calculator.

There are different ways to write mathematics on a calculator. For example, after pressing "3" and then "+" and then "2" and then "=" (or "ENTER") the number "5" will be displayed on the screen. This is called infix notation. Many more advanced calculators use postfix notation, that is, "3 4 +" instead of "3 + 4 =". The third way of noting things, "+ 3 4", called prefix notation, is rarely found on calculators. 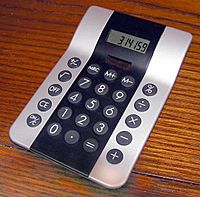 The first known tools used to aid arithmetic calculations were: bones (used to tally items), pebbles, and counting boards, and the abacus, known to have been used by Sumerians and Egyptians before 2000 BC. Except for the Antikythera mechanism (an "out of the time" astronomical device), development of computing tools arrived near the start of the 17th century: the geometric-military compass (by Galileo), logarithms and Napier bones (by Napier), and the slide rule (by Edmund Gunter). 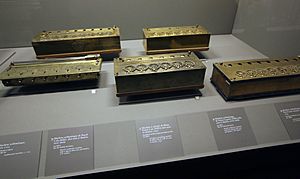 In 1642, the Renaissance saw the invention of the mechanical calculator (by Wilhelm Schickard and several decades later Blaise Pascal), a device that was at times somewhat over-promoted as being able to perform all four arithmetic operations with minimal human intervention. Pascal's Calculator could add and subtract two numbers directly and thus, if the tedium could be borne, multiply and divide by repetition. Schickard's machine, constructed several decades earlier, used a clever set of mechanised multiplication tables to ease the process of multiplication and division with the adding machine as a means of completing this operation. (Because they were different inventions with different aims a debate about whether Pascal or Schickard should be credited as the "inventor" of the adding machine (or calculating machine) is probably pointless.) Schickard and Pascal were followed by Gottfried Leibniz who spent forty years designing a four-operation mechanical calculator, inventing in the process his leibniz wheel, but who couldn't design a fully operational machine. There were also five unsuccessful attempts to design a calculating clock in the 17th century. 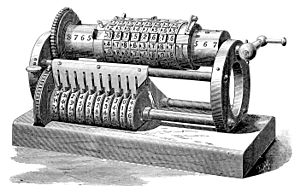 The 18th century saw the arrival of some interesting improvements, first by Poleni with the first fully functional calculating clock and four-operation machine, but these machines were almost always one of the kind. It was not until the 19th century and the Industrial Revolution that real developments began to occur. Although machines capable of performing all four arithmetic functions existed prior to the 19th century, the refinement of manufacturing and fabrication processes during the eve of the industrial revolution made large scale production of more compact and modern units possible. The Arithmometer, invented in 1820 as a four-operation mechanical calculator, was released to production in 1851 as an adding machine and became the first commercially successful unit; forty years later, by 1890, about 2,500 arithmometers had been sold plus a few hundreds more from two arithmometer clone makers (Burkhardt, Germany, 1878 and Layton, UK, 1883) and Felt and Tarrant, the only other competitor in true commercial production, had sold 100 comptometers.

It wasn't until 1902 that the familiar push-button user interface was developed, with the introduction of the Dalton Adding Machine, developed by James L. Dalton in the United States.

The Curta calculator was developed in 1948 and, although costly, became popular for its portability. This purely mechanical hand-held device could do addition, subtraction, multiplication and division. By the early 1970s electronic pocket calculators ended manufacture of mechanical calculators, although the Curta remains a popular collectable item.

A pocket calculator is a small calculator that helps people do arithmetic. It is so small that it can be put in a pocket. Its most common use is for addition, subtraction, multiplication, and division. Many pocket calculators are powered by solar cells. They are commonly seen in schools and businesses around the world and can be used quickly and efficiently for simple mathematical problems. Other names are 'miniature calculator' or 'mini calculator'.

A scientific calculator can do more things. It can often use exponents, pi, trigonometric ratios, and the order of operations. Scientific calculators can also use bigger numbers. They tend to cost more than pocket calculators. Most are programmable. The user can make a program directly with the calculator, or transfer one from a computer.

All content from Kiddle encyclopedia articles (including the article images and facts) can be freely used under Attribution-ShareAlike license, unless stated otherwise. Cite this article:
Calculator Facts for Kids. Kiddle Encyclopedia.