John Napier (he also signed as Neper, and Nepair) 1550 – 4 April 1617) was a Scottish landowner, nicknamed "Marvellous Merchiston". He was a mathematician, physicist, and astronomer. He was the 8th Laird of Merchiston. His Latinized name was Ioannes Neper.

John Napier is best known as the discoverer of logarithms and Napier's constant. He also invented the so-called "Napier's bones" and made common the use of the decimal point in arithmetic and mathematics. 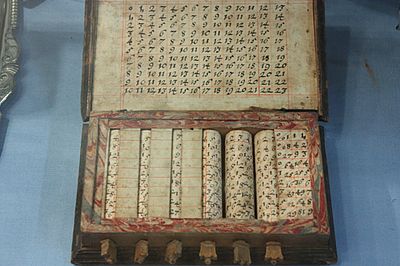 All content from Kiddle encyclopedia articles (including the article images and facts) can be freely used under Attribution-ShareAlike license, unless stated otherwise. Cite this article:
John Napier Facts for Kids. Kiddle Encyclopedia.