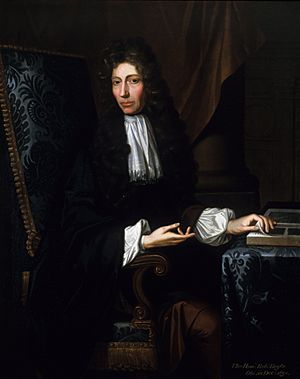 People who studied alchemy were called alchemists. Some things alchemists tried to do were change lead or mercury into gold, make the philosopher's stone, and make the "elixir of life," which they thought could cure (make better) any disease and make someone young again.

Alchemists believed that substances, mind, philosophies, religion, magic and astrology were related to each other. They tried to find connections between them. They tried to understand one by understanding the other. Some alchemists used metals (like gold or silver) to represent spiritual or occult ideas. People in many different countries studied alchemy.

In the 1600s and 1700s, people started to study only the properties of substances without trying to relate them to secret, old knowledge. They did experiments and wrote down what they discovered so other people could learn from them. One of the important people who did these experiments was Robert Boyle. People called the new study of substances chemistry.

Scientists have since discovered how to change one kind of element (the simplest kind of chemical substance) into another. In 1980, an American scientist named Glenn Seaborg discovered how to change a very tiny amount of bismuth into gold with a nuclear reactor. Making gold this way is much more difficult and expensive (costs a lot of money) than mining or recycling it.

All content from Kiddle encyclopedia articles (including the article images and facts) can be freely used under Attribution-ShareAlike license, unless stated otherwise. Cite this article:
Alchemy Facts for Kids. Kiddle Encyclopedia.