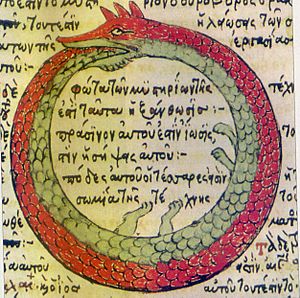 Drawing in a 1478 copy of a lost alchemical tract 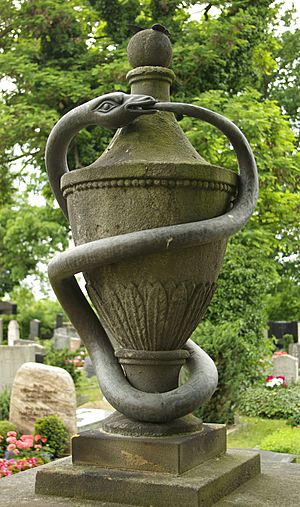 A grave sculpture in Erlangen

The ouroboros symbolizes eternity or cyclicality. It is the sense of something constantly re-creating itself. Like the phoenix, it symbolises cycles that begin again as soon as they end.

The first known appearance of the ouroboros motif is in KV62, the tomb of Tutankhamun, in the 14th century BC. The text is about the god Ra and his union with Osiris in the underworld. In an illustration, two serpents, with their tails in their mouths, coil around the head and feet of an enormous god (this the unified Ra-Osiris). The whole figure represents the beginning and the end of time. 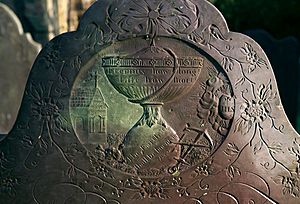 All content from Kiddle encyclopedia articles (including the article images and facts) can be freely used under Attribution-ShareAlike license, unless stated otherwise. Cite this article:
Ouroboros Facts for Kids. Kiddle Encyclopedia.