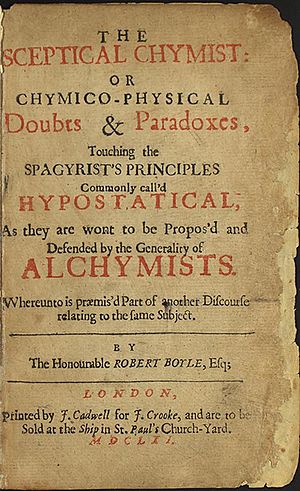 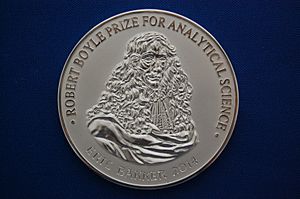 Boyle was born in Ireland to a titled Anglo-Irish family. He was the fourteenth child of Richard Boyle, 1st Earl of Cork, who had arrived in Ireland in 1588.

When Robert Hooke was young, Boyle employed him as an instrument-maker and assistant. They continued to cooperate when Hooke took charge of experiments at the Royal Society.

Scientific research was the main focus of Boyle's life. He joined other like-minded men in a group which called itself the "Invisible College". He was part of the group which founded the Royal Society in 1660.

Boyle was an alchemist, but also the first modern chemist. His 1661 book, The Sceptical Chymist, is important in the history of chemistry.

As a director of the East India Company Boyle spent large sums in promoting the spread of Christianity in the East. He contributed liberally to missionary societies and to the expenses of translating the Bible or portions of it into various languages.

Boyle supported the policy that the Bible should be available in the language of the people, in contrast to the Latin-only policy of the Roman Catholic Church at the time.

All content from Kiddle encyclopedia articles (including the article images and facts) can be freely used under Attribution-ShareAlike license, unless stated otherwise. Cite this article:
Robert Boyle Facts for Kids. Kiddle Encyclopedia.