The Royal Dublin Society (RDS) is the name given in 1820 to a philanthropic organisation which was founded as the 'Dublin Society' on 25 June 1731 to see Ireland thrive culturally and economically. The RDS is synonymous with its campus in Ballsbridge in Dublin, Ireland. This campus includes the "RDS Arena", "RDS Simmonscourt", "RDS Main Hall" and other venues which are used regularly for exhibitions, concerts and sporting events, including regular use by the Leinster Rugby team. 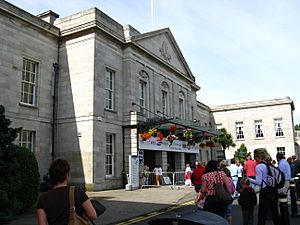 The society was founded by members of the Dublin Philosophical Society, chiefly Thomas Prior and Samuel Madden, as the 'Dublin Society for improving Husbandry, Manufactures and other Useful Arts'. On 8 July 1731 – a couple of weeks after initial foundation – the designation 'and Sciences' was added to the end of its name.

The stated aim of the "Dublin Society" was to promote the development of arts, agriculture, industry and science in Ireland and in 1792 the Society purchased the Leskean Cabinet to further this ambition. The "Royal" prefix was adopted in 1820 when George IV became Society patron. 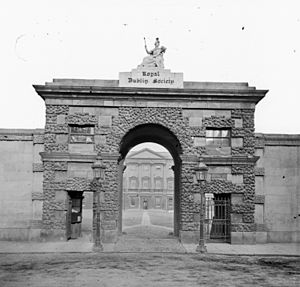 The society purchased Leinster House, home of the Duke of Leinster, in 1815 and founded a natural history museum there. The society acquired its current premises at Ballsbridge in 1879, and has since increased from the original fifteen to forty acres (60,000 to 160,000 m²). The premises consist of a number of exhibition halls (at the "RDS Main Hall"), a stadium (the "RDS Arena"), meeting rooms, bars, restaurants, and a multi purpose venue named "RDS Simmonscourt Pavilion".

The RDS Main Hall is a major centre for exhibitions, concerts and other cultural events in Dublin. It hosts, for example, the Young Scientist and Technology Exhibition each January.

The Simmonscourt Pavilion has a capacity of approximately 7,000, and hosted the Meteor Music Awards in February 2008, as well as a number of concerts including The Smashing Pumpkins and My Chemical Romance, and two Eurovision Song Contests, in 1981 and in 1988. Simmonscourt is where the show jumping horses are stabled during Dublin Horse Show week.

The RDS Arena (more commonly known simply as the RDS) was developed to host equestrian events, including the annual Dublin Horse Show. It is often used for other sporting events however – primarily football and rugby. Between September 1990 and April 1996 it was used for home games of Shamrock Rovers football club, on 19 February 1992 it played host to a home game between the Republic of Ireland national football team and Wales, and hosted the 2007 and 2008 FAI Cup finals.

In 2007 and 2008 the arena's capacity was expanded to 18,250 (with additional seated stands being built), and the venue is now used by the Leinster Rugby team for home games. The club also moved their Leinster Rugby Store to the RDS (between the two parade rings), and it is open on match days.

The covered Anglesea Stand is the oldest stand in the ground below which there is a small amount of terracing. Opposite the Anglesea Stand is the Grandstand which contains the TV gantry and was covered with a roof in 2008. Behind the goals are the uncovered North and South stands which are removed for showjumping events to allow for extra space.

The DART runs close to the RDS premises with Lansdowne and Sandymount being the closest stops. The RDS is served by bus route numbers 4, 7, 18 and 27x, which stop outside the Main Hall Entrance to the RDS on Merrion Road. 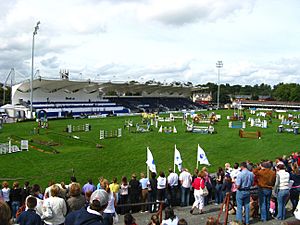 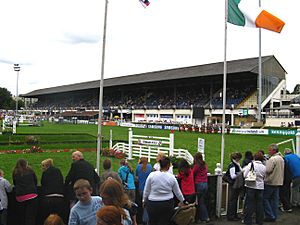 As an exhibitor, walking through those gates in Dublin 4, is the highlight of the year. To be able to compete in one of the four Royal Dublin Society arenas, in which you will showcase your hard work and partnership you have with your horse. If you are lucky enough to come and watch the action at the Dublin horse show, you will be greeted by the abundance of shops to avail of throughout the day. form equestrian stores to antiques, there is something for everybody at the Dublin Horse Show. A Great, fun-filled family day out.

In recent years, the venue has been used as a music venue, for many rock, heavy metal and pop artists.

Other notable performers who have played in the main arena include: Bon Jovi, Michael Jackson, Kylie Minogue, Radiohead, Shania Twain, The Cure and Metallica among others. U2 played 2 dates of their "Zooropa" tour on the 27 and 28 August 1993 in the main Arena.

In 2005, the RDS hosted a WWE SmackDown event as part of the WWE Summerbash tour of Europe. The event featured wrestlers such as Stone Cold Steve Austin, John Cena, Kurt Angle, and Rey Mysterio.

The RDS is the home of Leinster Rugby. The RDS hosts Leinster's home matches in the Magners League and the Heineken Cup as well as some pre-season games. In March 2008, the final of the Leinster Schools Senior Cup was played in the RDS due to the redevelopment of Lansdowne Road, its traditional venue. An autumn international between Ireland and Fiji was played 21 November 2009.

Shamrock Rovers F.C. played their home matches at the RDS stadium between 1990 and 1996, including against Górnik Zabrze in the 1994–95 UEFA Cup. The stadium hosted an international between the Republic of Ireland and Wales in February 1992; the 1994 UEFA Under-16 Championships; the FAI Cup Final in 2007 and 2008; and the 2008–09 UEFA Cup match between St Patrick's Athletic and Hertha Berlin. St. Pat's also played Steaua Bucureşti in the Arena on 27 August 2009 in the Play-off round of the opening season of the Europa League. The Republic of Ireland played two international friendly fixtures on 25 and 28 May 2010 against Paraguay and Algeria.

In 1983, the Ireland team played in the World Group of the Davis Cup for the only time. The match against a United States team including John McEnroe was played in the RDS rather than the usual venue, Fitzwilliam, to accommodate crowds of 6,000 each day.

The Boyle Medal (named after Robert Boyle (1627–1691), was inaugurated in 1899 and is awarded jointly by the RDS and the Irish Times for scientific research of exceptional merit in Ireland. By 2013 the medal had been awarded to 38 scientists.

Past recipients of the Boyle Medal:

All content from Kiddle encyclopedia articles (including the article images and facts) can be freely used under Attribution-ShareAlike license, unless stated otherwise. Cite this article:
Royal Dublin Society Facts for Kids. Kiddle Encyclopedia.