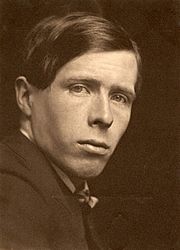 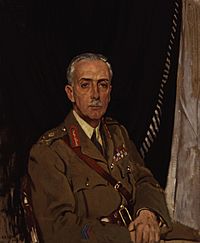 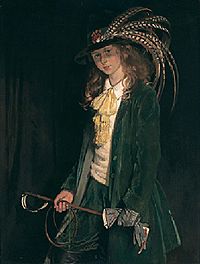 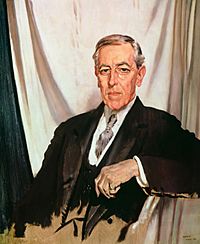 Sir William Newenham Montague Orpen KBE RA (27 November 1878 – 29 September 1931) was an Irish portrait painter, who worked mainly in London. He was an official war artist during World War I.

Most of these works, 138 in all, he gave to the British Government. They have simple white frames and are kept together in the Imperial War Museum in London. For his war work, he was made a Knight Commander of the Order of the British Empire (KBE) in the 1918 King's birthday honours list.

Otherwise, Orpen was seen at his best in personal family portraits.

"Orpen was fond of painting women sitters against a black background, lighting the figure from two sides, an arrangement which gave luminosity and a certain ethereal appearance to his unfaltering but matter of fact statement".

All content from Kiddle encyclopedia articles (including the article images and facts) can be freely used under Attribution-ShareAlike license, unless stated otherwise. Cite this article:
William Orpen Facts for Kids. Kiddle Encyclopedia.