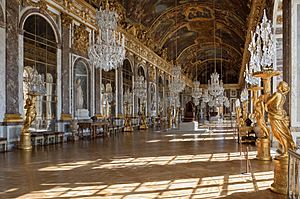 The Hall of Mirrors in the palace of Versailles, France (French: Grande Galerie or Galerie des Glaces) was constructed on what was once a terrace designed by Le Vau. Mansart and Le Brun designed and built the Hall between 1678 and 1684. The Hall is decorated with marble. The "French order" capitals depict a cock, Apollo, and fleur-de-lys. The walls and cornices are decorated with gilded bronze trophies by Coysevox, Tubi, Le Gros, Clérion, and Flamen. The niches contain depictions of Bacchus, Urania, Modesty, Venus in Modesty and antiques from the collections of King Louis XIV.

The ceiling depicts the War with Holland (1672-1678). The medallions and trompe l'œil paintings depict the War of Devolution (1667-1668). They also depict the administrative reforms in the early years of Louis XIV's reign. Two of the four alabaster tables are from the collections of the duc d'Antin. The vases and busts are from the Royal collections. The 1770 chandeliers and candelabra were reconstructed in 1980 after the originals and documents in the archives. 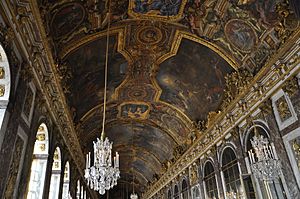 During the 17th century, the Hall of Mirrors was used by Louis XIV when he walked from his private apartment to the chapel. At this time, courtiers assembled to watch the king and members of the royal family pass. In 1745 the Hall was the scene of "The Yew Tree Ball". It was at this event that Louis XV met Madame de Pompadour. In the 19th century, the Prussian king, William I, was declared German emperor on 18 January 1871 in the Hall of Mirrors by Bismarck and the victorious German princes and lords. French Prime Minister Clemenceau chose the Hall of Mirrors to sign the Treaty of Versailles that ended World War I on 28 June 1919. The Hall of Mirrors still serves for state occasions such as receptions for visiting heads of state.

All content from Kiddle encyclopedia articles (including the article images and facts) can be freely used under Attribution-ShareAlike license, unless stated otherwise. Cite this article:
Hall of Mirrors (Versailles) Facts for Kids. Kiddle Encyclopedia.