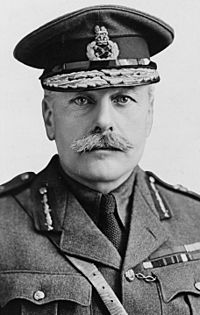 He was the senior commander of the British forces in France from 1915 until the end of the war. Most notably, he led them during the Battle of the Somme, the Third Battle of Ypres (Passchendaele), the Spring Offensive and the final Hundred Days Offensive.

Historians have often argued over whether Haig was a good general. In the years after the war, he was popular. After his death, some historians and politicians wrote books criticising Haig. They argued he made mistakes that led to a lot of casualties among British troops, especially at the Somme and Passchendaele; he has been nicknamed 'Butcher Haig' or 'the Butcher of the Somme'. David Lloyd George, the Prime Minister during the later years of the war, also did not agree with Haig. One of the best known books criticising Haig was Alan Clark's book The Donkeys (1961). This is known as the 'lions led by donkeys' view: the idea that Britain had great soldiers but bad generals.

All the same, some veterans, and academic historians have argued that Haig was a great general. For example, John Bourne notes that Haig helped the army use new weapons and technology. John Terraine argues that while the British Army lost a lot of men, this is not surprising given the size of the fighting, and other countries lost far more. Likewise, Gordon Corrigan argues that as a percentage of the population, Britain lost half as many people in the war as France and Germany.

All content from Kiddle encyclopedia articles (including the article images and facts) can be freely used under Attribution-ShareAlike license, unless stated otherwise. Cite this article:
Douglas Haig, 1st Earl Haig Facts for Kids. Kiddle Encyclopedia.