Stirling ( Scots: Stirlin; Scottish Gaelic: Sruighlea) is a city in central Scotland. The city is clustered around a large fortress and medieval old town. Stirling is the administrative centre for the Stirling council area, and is traditionally the county town of Stirlingshire. The city is located several miles to the west of the mouth of the River Forth. Historically it was strategically important as the "Gateway to the Highlands", with its position near the Highland Boundary Fault between the Scottish Lowlands and Highlands and has been described as the brooch which clasps the Highlands and the Lowlands together.

Its historical position as the nearest crossing of the Forth to the river mouth meant that it attracted invaders. The beast of Stirling is the wolf. According to legend, when Stirling was under attack from Viking invaders, a wolf howled, alerting the townspeople in time to save the town.

Once the capital of Scotland, Stirling contains the Great Hall (restored 1999) and the Renaissance Palace (restoration completed 2011) within Stirling Castle. Stirling also has its medieval parish church, the Church of the Holy Rude, where King James VI was crowned King of Scots on 29 July 1567. The Holy Rude still functions, with a service every Sunday.

Stirling is a centre for local government, higher education, retail, and industry. The 2011 census recorded the population of the city as 45,750, the wider Stirling council area has a population of 89,850. The majority of the population is located in its southeast corner, in the City of Stirling and in the surrounding area.

One of the principal royal strongholds of the Kingdom of Scotland, Stirling was created a Royal burgh by King David I in 1130, which it remained until 1975, when the burgh as an administrative unit was abolished. In 2002, as part of Queen Elizabeth II's Golden Jubilee, Stirling was granted city status. 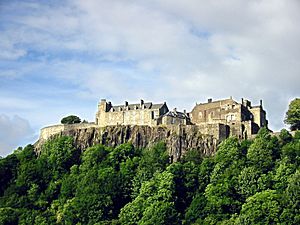 Stirling was originally a Stone Age settlement as shown by the Randolphfield standing stones and Kings Park prehistoric carvings that can still be found south of the town. The city has been strategically significant since at least the Roman occupation of Britain, due to its naturally defensible crag and tail hill (latterly the site of Stirling Castle), and its commanding position at the foot of the Ochil Hills on the border between the Lowlands and Highlands, at the lowest crossing point of the River Forth. It remained the river's lowest crossing until the construction of the Kincardine Bridge further downstream in the 1930s. It is supposed that Stirling is the fortress of Iuddeu or Urbs Giudi where Oswiu of Northumbria was besieged by Penda of Mercia in 655, as recorded in Bede and contemporary annals.

A ford, and later bridge, of the River Forth at Stirling brought wealth and strategic influence, as did its port. The town was chartered as a royal burgh by King David in the 12th century, with charters later reaffirmed by later monarchs (the town then referred to as Strivelyn). Major battles during the Wars of Scottish Independence took place at the Stirling Bridge in 1297 and at the nearby village of Bannockburn in 1314 involving William Wallace and Robert the Bruce respectively. There were also several Sieges of Stirling Castle in the conflict, notably in 1304. Sir Robert Felton, governor of Scarborough Castle in 1311, was slain at Stirling in 1314. 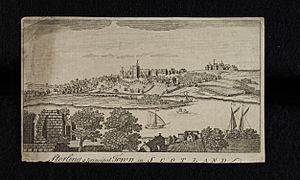 Stirling in the 18th century

The origin of the name Stirling is uncertain, but folk etymology suggests that it originates in either a Scots or Gaelic term meaning the place of battle, struggle or strife. Other sources suggest that it originates in a Brythonic name meaning "dwelling place of Melyn". The town has two Latin mottoes, which appeared on the earliest burgh seal of which an impression of 1296 is on record:

Hic Armis Bruti Scoti Stant Hic Cruce Tuti (The Britons stand by force of arms, The Scots are by this cross preserved from harms) and
Continet Hoc in Se Nemus et Castrum Strivilinse (The Castle and Wood of Stirling town are in the compass of this seal set down.)

Standing near the castle, the Church of the Holy Rude is one of the town's most historically important buildings. Founded in 1129 it is the second oldest building in the city after Stirling castle. It was rebuilt in the 15th century after Stirling suffered a catastrophic fire in 1405, and is reputed to be the only surviving church in the United Kingdom apart from Westminster Abbey to have held a coronation. On 29 July 1567 the infant son of Mary, Queen of Scots, was crowned James VI of Scotland here. Musket shot marks that may come from Cromwell's troops during the Wars of the Three Kingdoms are clearly visible on the tower and apse. Another important historical religious site in the area is the ruins of Cambuskenneth Abbey, the resting place of King James III of Scotland and his queen, Margaret of Denmark. During the Wars of the Three Kingdoms, the Battle of Stirling also took place in the centre of Stirling on 12 September 1648. 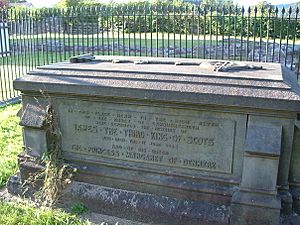 The tomb of James III, King of Scots at Cambuskenneth Abbey

The fortifications continued to play a strategic military role during the 18th century Jacobite Risings. In 1715, the Earl of Mar failed to take control of the castle. On 8 January 1746 (OS) 19 January 1746 (NS), the army of Bonnie Prince Charlie seized control of the town but failed to take the Castle. On their consequent retreat northwards, they blew up the church of St. Ninians where they had been storing munitions; only the tower survived and can be seen to this day.

Economically, the city's port supported overseas trade, including tea trade with India and timber trade with the Baltic. The coming of the railways in 1848 started the decline of the river trade, not least because a railway bridge downstream restricted access for shipping. By the mid 20th century the port had ceased to operate.

The Barnwell brothers, Frank and Harold, worked at Grampian Motors in Causewayhead, and in 1909 they designed and flew the first powered aircraft in Scotland. Frank Barnwell went on to design aircraft including the Bristol Blenheim. A small monument to the brothers' pioneering achievement has been erected at Causewayhead roundabout. 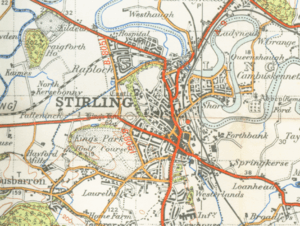 Stirling is renowned as the Gateway to the Highlands and is generally regarded as occupying a strategic position at the point where the flatter, largely undulating Scottish Lowlands meet the rugged slopes of the Highlands along the Highland Boundary Fault. The starkness of this contrast is evidenced by the many hills and mountains of the lower Highlands such as Ben Vorlich and Ben Ledi which can be seen to the northwest of the city. On the other hand, the Carse of Stirling, stretching to the west and east of the city, is one of the flattest and most agriculturally productive expanses of land in the whole of Scotland.

The land surrounding Stirling has been most affected by glacial erosion and deposition. The city itself has grown up around its castle which stands atop an ancient quartz-dolerite sill, a major defensive position which was at the lowest crossing point on the River Forth. Stirling stands on the Forth at the point where the river widens and becomes tidal. To the east of the city the Ochil Hills dominate the skyline with the highest peak in the range being Ben Cleuch, although Dumyat is more noticeable from Stirling. The Ochils meet the flat carse (floodplain) of the River Forth to the east of the distinctive geographical feature of Abbey Craig, a crag and tail hill upon which stands the 220 ft (67m) high Wallace National Monument.

The climate of Stirling differs little from that of much of the rest of central Scotland. The warm Gulf Stream air current from the Atlantic Ocean is the predominant influence, with a prevailing southwesterly wind. That said, the areas round Stirling Town Centre encounter significantly less snow in Winter than many of its very close neighbours such as Denny and Dunblane. Although this could be said as being anecdotal, it is likely to be because it is at a lower level and could be said to have its own microclimate.

Top of the Town

Top of the Town consists of Broad Street, Castle Wynd, Ballengeich Pass, Lower Castle Hill Road, Darnley Street, Baker Street ( formerly Baxters St) and St Mary's Wynd. These streets all lead up to Stirling Castle and are the favourite haunt of tourists who stop off at the Old Town Jail, Mar's Wark, Argyll's Lodging and the castle. Ballengeich Pass leads to the graveyard at Ballengeich and the Castle Wynd winds past the old graveyard. The Top of the Town from Broad Street upwards is renowned for its cobblestoned roads, and cars can be heard rattling over the cobblestones on the way down. Craft shops and tourist-focused shops are evident on the way up and once at the top, panoramic views are available across Stirling and beyond. 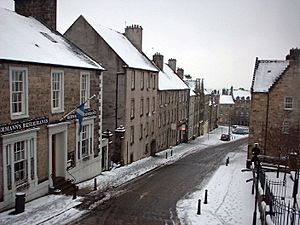 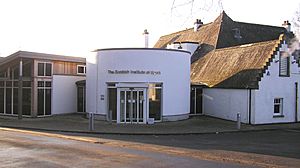 Stirling is home to professional league teams in football, rugby and cricket.

The senior football team, Stirling Albion, play in the Scottish League Two at their home ground at Forthbank. In July 2010, the Stirling Albion Supporters' Trust successfully took over the running of the club buying out the long-serving chairman, Peter McKenzie, after 14 months of campaigning. This made Stirling Albion the first fully owned community club in the history of British football, after previous attempts made by Manchester United, Liverpool and Rangers.

The athletics team Central Athletic Club are based at the University of Stirling. The University Stirling Wanderers Hockey Club have also moved to a brand new (international standard) pitch at Forthbank for season 2008–09. Next to this pitch there is also the ground of Stirling County Cricket Club, whose pavilion captured an architectural award in June 2009, three years after its opening.

The University of Stirling is a major centre of sports training and education in Scotland. It was designated as Scotland's University for Sporting Excellence by the Scottish Government in 2008. The headquarters of the Scottish Institute of Sport is a purpose-built facility on the campus which opened in 2002. Also at the university is the Scottish National Swimming Academy, where Rio 2016, Olympic silver medalists and students at the university, Duncan Scott and Robbie Renwick trained. Commonwealth gold medalist Ross Murdoch, who also competed at Rio 2106, is a student at the university. The Gannochy National Tennis centre, which is seen as a tennis centre of excellence, was where Andy Murray and his brother Jamie Murray honed their skills as juniors. Gordon Reid, wheel chair Olympic gold medalist in 2016, was a tennis scholar at the university. The university men's and women's golf teams are consistently ranked among the best in European.

The university has a dedicated sports studies department, which is within the Faculty of Health Science and Sport, and is ranked amongst the best in the United Kingdom for its provision of sports facilities, with the maximum 5-star award, shared by 16 other universities in the UK. The University of Stirling also currently hosts the Scottish men's lacrosse champions.

Stirling and its surrounding area has a number of 9- and 18-hole golf courses, the largest of which is the Stirling Golf Course, located in the Kings Park area of the city. The Peak, a new Sports Village, was opened in April 2009 to cater for a range of sporting activities.

In June 2014, Stirling will become the home of Scottish cricket after an agreement between Stirling County Cricket Club, Cricket Scotland and Stirling Council. It is hoped that the redevelopment of the ground will start at end 2014 with the intention being to upgrade it to international match standards. Scotland will play the majority of their home international games at the ground, starting with the World T20 qualifiers in the summer of 2015.

The development will see a new pavilion and indoor training facility built at New Williamfield, the home of Stirling County Cricket Club, with Cricket Scotland relocating its headquarters from the National Cricket Academy at Ravelston, Edinburgh. 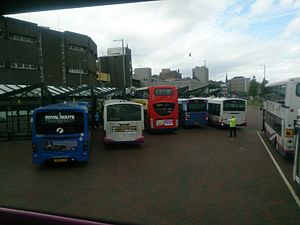 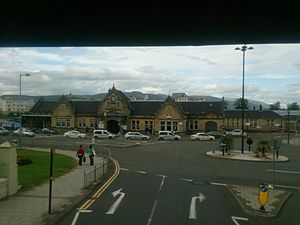 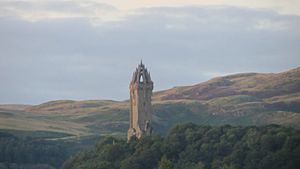 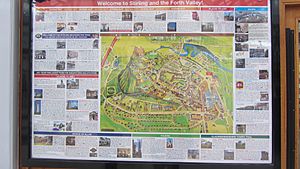 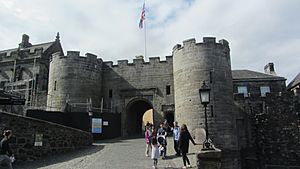 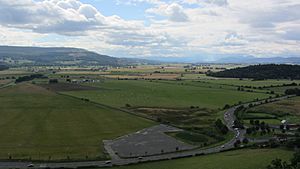 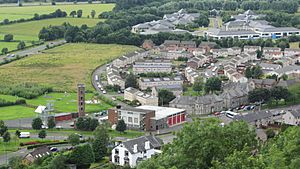 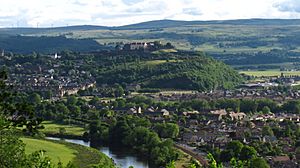 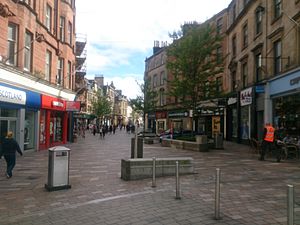 All content from Kiddle encyclopedia articles (including the article images and facts) can be freely used under Attribution-ShareAlike license, unless stated otherwise. Cite this article:
Stirling Facts for Kids. Kiddle Encyclopedia.