Kids Encyclopedia Facts
This page is about the modern administrative area. For the county, see Stirlingshire.

The Stirling council area (Scots: Stirlin; Scottish Gaelic: Sruighlea) is one of the 32 council areas of Scotland, and has a population of about 94,330 (2017 estimate). It was created under the Local Government etc (Scotland) Act 1994 with the boundaries of the Stirling district of the former Central local government region, and it covers most of Stirlingshire (except Falkirk) and the south-western portion of Perthshire. Both counties were abolished for local government purposes under the Local Government (Scotland) Act 1973.

The administrative centre of the area is the city of Stirling, with the headquarters at Old Viewforth.

The majority of the population of the area is located in its southeast corner, in the city of Stirling and in the surrounding lowland communities: Bridge of Allan and Dunblane to the north, Bannockburn to the immediate south, and the three former coal mining communities of Cowie, Fallin, and Plean, known collectively as the "Eastern Villages".

The remaining 30 percent of the region's population is sparsely distributed across the rural, mainly highland, expanse in the north of the region. The southern half of this rural area comprises the flat western floodplain of the River Forth, bounded on the south by the Touch Hills and the Campsie Fells. North of the glen lie the Trossachs mountains, and the northern half of the region is generally mountainous in character.

As with all local authorities in Scotland, Stirling Council has a number of multi-member wards electing representatives under the single transferable vote system.

The wards and their councillors are: 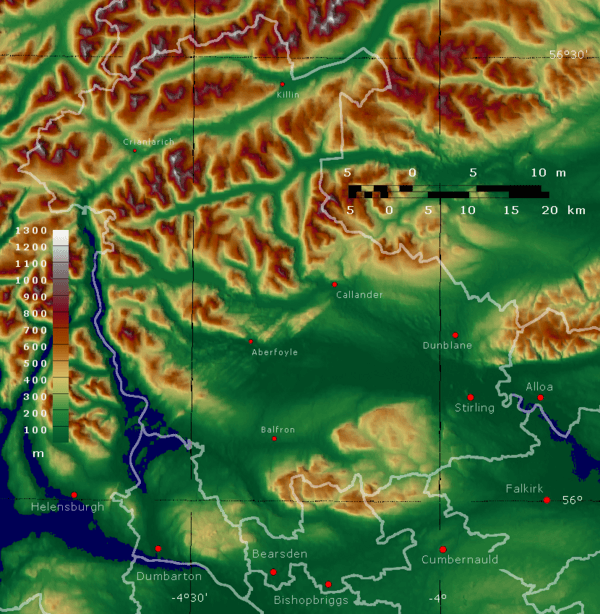 Topographic map of Stirling and East and West Dunbartonshire

As well as the city of Stirling itself, there are many towns, villages and hamlets spread across the council area:

All content from Kiddle encyclopedia articles (including the article images and facts) can be freely used under Attribution-ShareAlike license, unless stated otherwise. Cite this article:
Stirling (council area) Facts for Kids. Kiddle Encyclopedia.