Aberfoyle (Scottish Gaelic: Obar Phuill) is a village in the historic county and registration county of Perthshire and the council area of Stirling, Scotland. The settlement lies 27 miles (43 km) northwest of Glasgow.

The town is situated on the River Forth at the foot of Craigmore (420 metres high). Since 1885, when the Duke of Montrose constructed a road over the eastern shoulder of Craigmore to join the older road at the entrance of the Trossachs pass, Aberfoyle has become the alternative route to the Trossachs and Loch Katrine; this road, known as the Duke's Road or Duke's Pass, was opened to the public in 1931 when the Forestry Commission acquired the land.

Loch Ard, about two miles (3 km) west of Aberfoyle, lies 40 metres above the sea. It is three miles (5 km) long (including the narrows at the east end) and one mile (1½ km) broad. Towards the west end is Eilean Gorm (the green isle), and near the north-western shore are the falls of Ledard. Two miles northwest is Loch Chon, at 90m above the sea, 1 1⁄4 miles (2.0 kilometres) long, and about half a mile broad. It drains by the Avon Dhu to Loch Ard, which is drained in turn by the Forth.

In the past Aberfoyle was spelt alternatively as "Aberfoil". 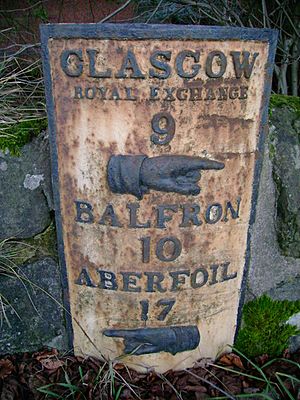 An old milepost near Craigmaddie House. Notice the spelling of Aberfoyle.

Visitors were first attracted to Aberfoyle and the surrounding area after the publication of The Lady of the Lake by Sir Walter Scott in 1810. The poem described the beauty of Loch Katrine. Aberfoyle describes itself as The Gateway to the Trossachs, and is well situated for visitors to access attractions such as Loch Lomond and Inchmahome Priory at the Lake of Menteith. A tourist information office run by VisitScotland sits in the centre of town, offering free information, selling souvenirs and acting as a booking office for many of the local B&B's and hotels. Aberfoyle Golf Club was built in 1860 and is located just south of town near the Rob Roy restaurant. Aberfoyle is also part of the Loch Lomond and The Trossachs National Park.

Aberfoyle is also home to the largest Go Ape adventure course in the UK, featuring the longest death slide, or 'zip-line', in the UK.

Aberfoyle has connections to many historical figures such as Rob Roy and Mary, Queen of Scots. Robert Roy MacGregor was born at the head of nearby Loch Katrine, and his well-known cattle stealing exploits took him all around the area surrounding Aberfoyle. It is recorded, for example, that in 1691, the MacGregors raided every barn in the village of Kippen and stole all the villagers' livestock! There currently stands a tree in the village that MacGregor was reputed to have climbed and hid in to escape the clutches of the law. Also, Mary, Queen of Scots, visited nearby Inchmahome Priory often as a child, and during her short reign. She also used the priory during her short reign, particularly in 1547, where she felt safe from the English Army.

However, the most local historical figure is the Reverend Robert Kirk, born in 1644. It was the Rev. Kirk who provided the first translation into Gaidhlig of the Book of Psalms, however, he is better remembered for the publication of his book "The Secret Commonwealth of Elves, Fauns, and Fairies" in 1691. Kirk had long been researching fairies, and the book collected several personal accounts and stories of folk who claimed to have encountered them. It was after this, while Kirk was minister of Aberfoyle parish, that he died in unusual circumstances.

Kirk had long believed that the local Doon Hill was the gateway to the "Secret Commonwealth", or the land of the Fairies. It was a place that Kirk visited often, taking daily walks there from his manse. The story goes that the Fairies of Doon Hill were angry with the Rev. Kirk for going into the domain of the Unseelie court, where he had been warned not to go, and decided to imprison him in Doon Hill — for one night in May 1692, the Rev. Kirk went out for a walk to the hill, in his nightshirt. Some accounts claim that he simply vanished, however he suddenly collapsed. He was found and brought home, but died soon afterwards. He was buried in his own kirkyard, although local legends claim that the fairies took his body away, and the coffin contains only stones. The huge pine tree that still stands at the top of Doon Hill is said to contain Kirk's imprisoned spirit.

Kirk's cousin, Graham of Duchray, was then to claim that the spectre of Kirk had visited him in the night, and told him that he had been carried off by the Fairies. Having left his widow expecting a child, the spectre of Kirk told Graham that he would appear at the baptism, whereupon Graham was to throw an iron knife at the apparition, thus freeing Kirk from the Fairies' clutches. However, when Kirk's spectre appeared, Graham was apparently too shocked by the vision to throw the knife, and Kirk's ghost faded away forever.

Today, visitors to Doon Hill write their wishes on pieces of white silk, or other white cloth, and tie them to the branches of the trees for the Fairies to grant. Unfortunately some people tie plastic confectionery wrappers instead, which slightly spoils the magic of the location and may harm the ecology of the forest. It is also said that if one runs around the great 'Minister's Pine' tree at the summit seven times, then the Fairies will appear. Some people have tried this and afterwards claim to have seen apparitions. Others merely get a bit dizzy and fall over.

All content from Kiddle encyclopedia articles (including the article images and facts) can be freely used under Attribution-ShareAlike license, unless stated otherwise. Cite this article:
Aberfoyle, Stirling Facts for Kids. Kiddle Encyclopedia.