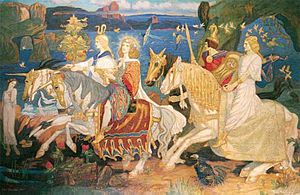 Riders of the Sidhe (1911), painting by John Duncan

The aos sí ( older form aes sídhe) is the Irish term for a supernatural race in Irish mythology and Scottish mythology (where it is usually spelled Sìth, but pronounced the same), comparable to the fairies or elves.

They are said to live underground in fairy mounds, across the western sea, or in an invisible world that coexists with the world of humans. This world is described in the Lebor Gabála Érenn as a parallel universe in which the aos sí walk amongst the living. In the Irish language, aos sí means "people of the mounds" (the mounds are known in Irish as "the sídhe"). In modern Irish the people of the mounds are also called daoine sídhe in Scottish mythology they are daoine sìth. They are variously said to be the ancestors, the spirits of nature, or goddesses and gods.

Some secondary and tertiary sources in English, including well-known and influential authors such as W. B. Yeats, refer to aos sí simply as "the sídhe" (lit. "mounds").

In many Gaelic tales, the aos sí are later, literary versions of the Tuatha Dé Danann ("People of the Goddess Danu")—the deities and deified ancestors of Irish mythology. Some sources describe them as the survivors of the Tuatha Dé Danann who retreated into the Otherworld when fleeing the mortal Sons of Míl Espáine who, like many other early invaders of Ireland, came from Iberia. As part of the terms of their surrender to the Milesians, the Tuatha Dé Danann agreed to retreat and dwell underground. (In later interpretations, each tribe of the Tuatha Dé Danann was given its own mound.) Geoffrey Keating, an Irish historian of the early 17th century, equates Iberia with the Land of the Dead, providing a possible connection to the aos sí.

In folk belief and practice, the aos sí are often appeased with offerings, and care is taken to avoid angering or insulting them. Often they are not named directly, but rather spoken of as "The Good Neighbors", "The Fair Folk", or simply "The Folk". The most common names for them, aos sí, aes sídhe, daoine sídhe (singular duine sídhe) and daoine sìth mean, literally, "people of the mounds" (referring to the sídhe). The aos sí are generally described as stunningly beautiful, though they can also be terrible and hideous.

Aos sí are seen as fierce guardians of their abodes—whether a fairy hill, a fairy ring, a special tree (often a hawthorn) or a particular loch or wood. It is believed that infringing on these spaces will cause the aos sí to retaliate in an effort to remove the people or objects that invaded their homes. Many of these tales contribute to the changeling myth in west European folklore, with the aos sí kidnapping trespassers or replacing their children with changelings as a punishment for transgressing. The aos sí are often connected to certain times of year and hours; as the Gaelic Otherworld is believed to come closer to the mortal world at the times of dusk and dawn, the aos sí correspondingly become easier to encounter. Some festivals such as Samhain, Beltane and Midsummer are also associated with the aos sí.

Sídhe are the hills or tumuli that dot the Irish landscape. In modern Irish the word is sí; in Scottish Gaelic, sìth; in Old Irish síde and the singular is síd. In a number of later, English-language texts, the word sídhe is incorrectly used both for the mounds and the people of the mounds. However sidh in older texts refers specifically to "the palaces, courts, halls or residences" of the otherworldly beings that supposedly inhabit them. The fact that many of these sídhe have been found to be ancient burial mounds has contributed to the theory that the aos sí were the pre-Celtic occupants of Ireland.

Others present these stories as mythology deriving from Greek cultural influence, deriving arguments mainly from Hesiod's Works and Days, which portrays the basic moral foundation and plantation techniques of the citizens of Greece and describes the races of men, created by the Greek deities. However, many of these views have been deemed unlikely, and the influence can be explained by the similar moral foundations stemming from the two cultures' Indo-European background.

Daoine maithe is Irish for "the good people", which is a popular term used to refer to the fairies in Irish folklore. Due to the oral nature of Irish folklore the exact origins of the fairies is not well defined. There are stories enough to support two possible origins. The fairies could either be fallen angels or the descendants of the Tuatha Dé Danann; in the latter case this is equivalent with Aos Sí. In the former case, it is said that the fairies are angels who have fallen from heaven, but whose sins were not great enough to warrant hell.

They are generally human-like, though there are exceptions such as the Puca or Mermaid. The defining features of the Irish fairies are their supernatural abilities and their temperament. If treated with respect and kindness, Irish fairies can be quite benevolent; however, if they are mistreated they will react cruelly.

The banshee or bean sídhe (from Old Irish: ban síde), which means "woman of the sídhe", has come to indicate any supernatural woman of Ireland who announces a coming death by wailing and keening. Her counterpart in Scottish mythology is the bean sìth (sometimes spelled bean-sìdh). Other varieties of aos sí and daoine sìth include the Scottish bean nighe: the washerwoman who is seen washing the bloody clothing or armour of the person who is doomed to die; the leanan sídhe: the "fairy lover"; the cat sìth: a fairy cat; and the Cù Sìth: fairy dog.

The sluagh sídhe—"the fairy host"—is sometimes depicted in Irish and Scottish lore as a crowd of airborne spirits, perhaps the cursed, evil or restless dead. The siabhra (anglicised as "sheevra"), may be a type of these lesser spirits, prone to evil and mischief. However, an Ulster folk song also uses "sheevra" simply to mean "spirit" or "fairy". 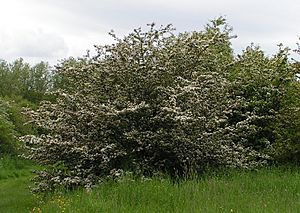 Hawthorn tree, considered in local Irish lore, and Celtic folklore in general, to be sacred to the Aos Sí

Creideamh Sí is Irish for the "Fairy Faith", a collection of beliefs and practices observed by those who wish to keep good relationships with the aos sí and avoid angering them. The custom of offering milk and traditional foods—such as baked goods, apples or berries—to the aos sí have survived through the Christian era into the present day in parts of Ireland, Scotland and the diaspora. Those who maintain some degree of belief in the aos sí also are aware to leave their sacred places alone and protect them from damage through road or housing construction.

All content from Kiddle encyclopedia articles (including the article images and facts) can be freely used under Attribution-ShareAlike license, unless stated otherwise. Cite this article:
Aos Sí Facts for Kids. Kiddle Encyclopedia.