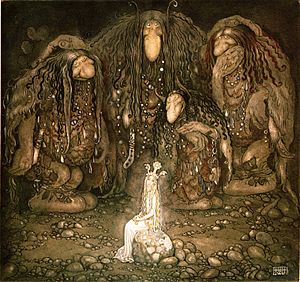 Trolls with a stolen princess

A changeling is a creature found in folklore and folk religion. A changeling child was believed to be a fairy child that had been left in place of a human child stolen by the fairies. The theme of the swapped child is common in medieval literature and reflects concern over infants thought to be afflicted with unexplained diseases, disorders, or developmental disabilities.

It is typically described as being the offspring of a fairy, elf or other legendary creature that has been secretly left in the place of a human child. Sometimes the term is also used to refer to the child who was taken. The apparent changeling could also be a stock or fetch, an enchanted piece of wood that would soon appear to grow sick and die. The theme of the swapped child is common among medieval literature and reflects concern over infants thought to be afflicted with unexplained diseases, disorders, or developmental disabilities.

A human child might be taken due to many factors: to act as a servant, the love of a human child, or malice. Most often it was thought that fairies exchanged the children. In rare cases, the very elderly of the Fairy people would be exchanged in the place of a human baby, and then the old fairy could live in comfort, being coddled by its human parents. Simple charms, such as an inverted coat or open iron scissors left where the child sleeps, were thought to ward them off; other measures included a constant watch over the child.

D. L. Ashliman points out that changeling tales illustrate an aspect of family survival in pre-industrial Europe. A peasant family's subsistence frequently depended upon the productive labor of each member, and it was difficult to provide for a person who was a permanent drain on the family's scarce resources. "The fact that the changelings' ravenous appetite is so frequently mentioned indicates that the parents of these unfortunate children saw in their continuing existence a threat to the sustenance of the entire family. Changeling tales support other historical evidence in suggesting that infanticide was not infrequently the solution selected." 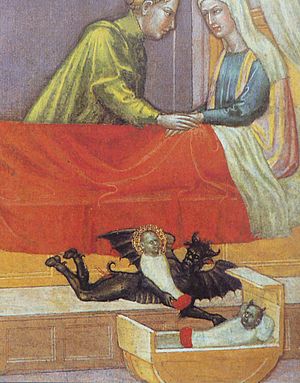 The devil steals a baby and leaves a changeling behind, early 15th century, detail of "The legend of St. Stephen" by Martino di Bartolomeo

Purpose of a changeling

One belief is that trolls thought that it was more respectable to be raised by humans and that they wanted to give their own children a human upbringing. Some people believed that trolls would take unbaptized children. Once children had been baptized and therefore become part of the Church, the trolls could not take them.

Beauty in human children and young women, particularly blond hair, was said to attract the fairies.

In Scottish folklore, the children might be replacements for fairy children in the tithe to Hell; this is best known from the ballad of Tam Lin. According to common Scottish myths, a child born with a caul (head helmet) across his or her face is a changeling, and of fey birth.

Some stories tell of changelings who forget they are not human and proceed to live a human life. Changelings which do not forget, however, in some stories return to their fairy family, possibly leaving the human family without warning. The human child that was taken may often stay with the fairy family forever.

Some folklorists believe that fairies were memories of inhabitants of various regions in Europe who had been driven into hiding by invaders. They held that changelings had actually occurred; the hiding people would exchange their own sickly children for the healthy children of the invaders.

The reality behind many changeling legends was often the birth of deformed or developmentally disabled children. Among the diseases or disabilities with symptoms that match the description of changelings in various legends are spina bifida, cystic fibrosis, PKU, progeria, Down syndrome, homocystinuria, Williams syndrome, Hurler syndrome, Hunter syndrome, regressive autism, Prader-Willi Syndrome, and cerebral palsy. The greater incidence of birth defects in boys correlates to the belief that male infants were more likely to be taken.

As noted, it has been hypothesized that the changeling legend may have developed, or at least been used, to explain the peculiarities of children who did not develop normally, probably including all sorts of developmental delays and abnormalities. In particular, it has been suggested that children with autism would be likely to be labeled as changelings or elf-children due to their strange, sometimes inexplicable behavior. For example, this association might explain why fairies are often described as having an obsessive impulse to count things like handfuls of spilled seeds. This has found a place in autistic culture. Some autistic adults have come to identify with changelings (or other replacements, such as aliens) for this reason and their own feeling of being in a world where they do not belong and of practically not being the same species as the other people around them. (Compare the pseudoscientific New Age concept of indigo children.)

All content from Kiddle encyclopedia articles (including the article images and facts) can be freely used under Attribution-ShareAlike license, unless stated otherwise. Cite this article:
Changeling Facts for Kids. Kiddle Encyclopedia.