Down syndrome facts for kids 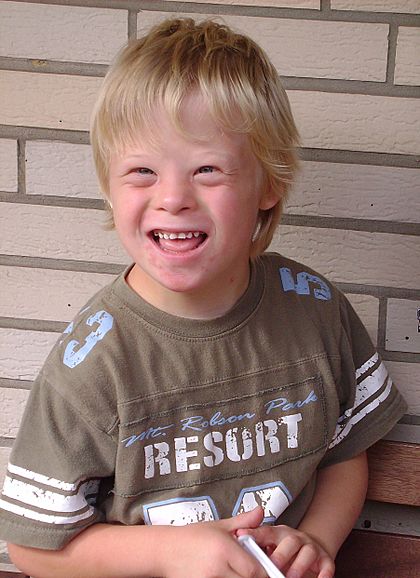 An eight-year-old boy with Down syndrome

Down syndrome (or Down's syndrome or trisomy 21; old name mongoloid idiocy) is a genetic disorder. People with Down syndrome have an extra copy of chromosome 21, or part of it.

Down syndrome causes a mental handicap. It may be mild or severe. The average IQ of a young adult with Down syndrome is 50, equivalent to the mental age of an 8- or 9-year-old child. This can vary widely, but most individuals need supervision if they are to live their lives in a satisfactory way. Children who have this condition take more time to learn new things.

The condition is named after John Langdon Down, the British doctor who first described it in 1866.

Of every 800 to 1000 babies that are born, one is diagnosed with Down syndrome. Older women have a higher chance of having a baby with Down syndrome. If they have a procedure known as amniocentesis, pregnant mothers can be told whether their foetus has Down syndrome. Sound scans may also diagnose the presence of Downs. Mothers whose foetus is diagnosed as having Downs syndrome may choose to have an abortion. In the United Kingdom and Europe 92% of such cases are aborted. 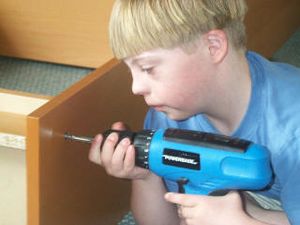 They also grow differently from other children. Babies with Down Syndrome can be identified at birth because they may have a specific set of physical features. These features include narrow eyes, a flat nose-bridge, smaller mouths and shorter fingers. Smaller mouths can result in tongue protrusion or what looks like a large tongue. Sometimes the little fingers curve inwards as well, and there is also often a space between the big toe and the others. People with Down syndrome often have heart defects or Alzheimer's disease when they are older. About 90% of people with Down syndrome live through their teens. The lifespan of a person with Down syndrome averages between 50 and 55 years old.

So far there have been no treatments for Down syndrome.

Well-known people with Down syndrome 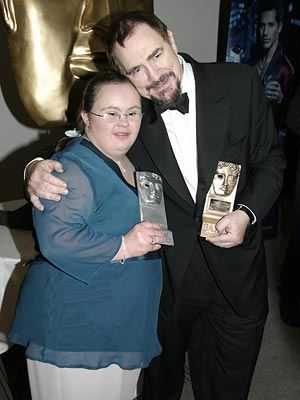 The Down Syndrome Association of Los Angeles keeps a list of people with Down syndrome with roles in TV and movies.

All content from Kiddle encyclopedia articles (including the article images and facts) can be freely used under Attribution-ShareAlike license, unless stated otherwise. Cite this article:
Down syndrome Facts for Kids. Kiddle Encyclopedia.