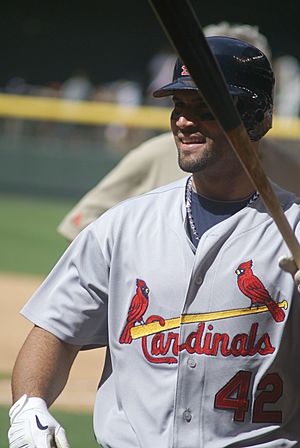 Pujols was born on January 16, 1980 in Santo Domingo, the capital of the Dominican Republic. When he was 16, Pujols's family moved to Missouri. He learned English at Fort Osage High School and later studied to be an American citizen.

He went to Maple Woods Community College and posted a .461 on-base average (which means he got on base 461 times out of every 1,000 at-bats).

At age 19, Pujols was drafted by the St. Louis Cardinals. He was a very low draft pick (402nd in the 13th round of the draft). He played his first season with one of the Cardinals' minor league teams, the Peoria Chiefs.

In 2002, Pujols was the runner-up for the Most Valuable Player Award, and the Cardinals reached the National League Championship Series.

In 2005, the Baseball Writers of America voted Pujols the National League's Most Valuable Player.

In 2006, the Cardinals won the World Series. Pujols was also named to the National League All-Star Team that year.

All content from Kiddle encyclopedia articles (including the article images and facts) can be freely used under Attribution-ShareAlike license, unless stated otherwise. Cite this article:
Albert Pujols Facts for Kids. Kiddle Encyclopedia.