Chesterfield is a city in St. Louis County, Missouri, United States, and a western suburb of St. Louis. As of the 2010 census, the population was 47,484, making it the state's fourteenth-largest city. The broader valley of Chesterfield was originally referred to as "Gumbo Flats", derived from its soil, which though very rich and silty, became like a gumbo when wet.

Portions of Chesterfield are located in the floodplain of the Missouri River, now known as Chesterfield Valley, formerly Gumbo Flats. This area was submerged during the Great Flood of 1993; higher levees built since then have led to extensive commercial development in the valley. Chesterfield Valley is the location of Spirit of St. Louis Airport, used for corporate aviation, as well as the longest outdoor strip mall in America. The remainder of Chesterfield is located on the bluffs above the floodplain, and includes residential and retail development. Chesterfield is also home to several mid- to high-rise buildings, the tallest being the Drury Plaza Hotel, which is 12 stories and 125 feet tall.

Present-day Chesterfield is known to have been a site of Native American inhabitation for thousands of years. A site in western Chesterfield containing artwork and carvings has been dated as 4,000 years old. A Mississippian site, dated to around the year 1000, containing the remains of what have been identified as a market and ceremonial center, is also located in modern Chesterfield.

The present-day city of Chesterfield is made up of several smaller historical communities, including:

For many years, "Chesterfield" was an all-inclusive place-name for a vast, unincorporated sub-region of western St. Louis County (called "West 'County" by metro area residents) containing the unincorporated historical communities listed above, plus areas now incorporated as cities of their own (e.g., Ballwin). Police and fire protection in the community were fragmented and sporadic, the former provided by St. Louis County. As the population grew, Chesterfield Mall and other retail and commercial real estate developments sprang up; however, many residents were concerned about the lack of quality public services, and that the municipal sales tax benefited the county instead of the community.

An organization was formed calling itself the "Chesterfield Incorporation Study Committee." Headed by its president, John A. Nuetzel (himself a former president of the River Bend Association, a zoning watchdog group), the members "passed the hat" at neighborhood meetings, engaged legal help, drew up metes and bounds, and forced several failed public votes for incorporation. After a number of years, in 1988, The City of Chesterfield was finally established by its residents, and has thrived as perhaps West County's premier residential, business, retail, and transportation center. 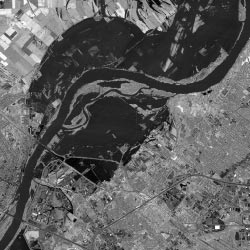 Satellite image of Missouri River during Great Flood of 1993.

On July 30, 1993, the levee that protected Gumbo Flats (now known as the Chesterfield Valley) from the Missouri River failed. This was the first time the levee had failed since 1935. The town was told to evacuate, and the whole area of Gumbo Flats was flooded by feet of water. Today, the area has become the Chesterfield Commons retail area.

Interstate 64 runs East-West through Chesterfield. There are seven exits serving the city (numbers 14-21). Missouri Route 340 (a.k.a., Olive Blvd.) runs on East-West though much of Chesterfield, before turning Southwest near the I-64 Interchange; its name changes to Clarkson Road south of this junction. Missouri Route 141 (a.k.a., Woods Mill Road) runs along the eastern border between Chesterfield and Town and Country, Missouri. Route 141's northern terminus was, until recently, located in Chesterfield at Olive Blvd. The Missouri Department of Transportation (MoDOT) and St. Louis County Department of Highways and Traffic (DHT) began construction of Route 141 in Chesterfield in 2009. MoDOT expanded Route 141 between just south of Ladue Road (Route AB) to Olive Road (Route 340). DHT extends Route 141 from Olive Road to the Page Avenue Extension (Route 364) at the Maryland Heights Expressway.

Public transportation is provided by Metro and connects Chesterfield to many other portions of Greater St. Louis by numerous bus routes.

Spirit of St. Louis Airport is located in the Chesterfield Valley; the airport is owned by St. Louis County.

Central Midland Railway (CMR), a division of Progressive Rail Inc. of Minnesota, provides regular freight rail service to industrial customers located in the Chesterfield Valley. CMR operates the far eastern segment of the former Chicago, Rock Island and Pacific Railway's St. Louis to Kansas City main line that was constructed in 1870. The active portion of the former CRI&P line runs from the north side of St. Louis, where it connects with the Terminal Railroad Association of St. Louis and Union Pacific Railroad, and now terminates in Union, Missouri. A primary rail customer in Chesterfield is a RockTenn (formerly Smurfit Stone) corrugated packaging plant which is located on a spur track that extends from the main track northward along the east end of the runway of the Spirit of St. Louis Airport. RockTenn typically receives inbound shipments of corrugated paper.

Faust Park contains an updated playground, historical village, walking trail, carousel, and the "The Butterfly House", which opened in 1998. A nearby giant cement butterfly sculpture by Bob Cassilly was dedicated in 1999.

Reinsurance Group of America, Dierbergs, Kellwood, Amdocs, Aegion and Broadstripe have their headquarters in Chesterfield. Chesterfield has three malls, two of which are outlet malls as well as a strip mall called the Chesterfield Commons.

Colleges and universities and trade schools

All content from Kiddle encyclopedia articles (including the article images and facts) can be freely used under Attribution-ShareAlike license, unless stated otherwise. Cite this article:
Chesterfield, Missouri Facts for Kids. Kiddle Encyclopedia.