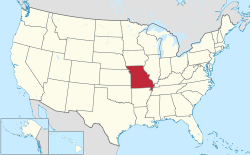 Map of the United States with Missouri highlighted

Missouri is a state located in the Midwestern United States. In Missouri, cities are classified into three types: 3rd Class, 4th Class, and those under constitutional charters. A few older cities are incorporated under legislative charters (Carrollton, Chillicothe, LaGrange, Liberty, Miami, Missouri City, and Pleasant Hill) which are no longer allowed. (Carthage is also a Charter City and Charter Cities are by constitution not legislation and are still allowed to this day). The level at which they incorporate is determined by their population when they incorporate. They do not change if they gain or lose in population, unless a vote is held by the people.

Cities under constitutional charters may operate under any form of municipal government if it is enacted in the city's charter.

Population data based on 2019 estimates.

All content from Kiddle encyclopedia articles (including the article images and facts) can be freely used under Attribution-ShareAlike license, unless stated otherwise. Cite this article:
List of cities in Missouri Facts for Kids. Kiddle Encyclopedia.