Kids Encyclopedia Facts
Not to be confused with Jackson, Missouri.

Jackson County is located in the western portion of the U.S. state of Missouri. As of the 2020 census, the population was 717,204. The estimated population in 2021 is 719,511 making it the second-most populous county in the state (after St. Louis County). Although Independence retains its status as the original county seat, Kansas City, Missouri serves as a second county seat and the center of county government. The county was organized December 15, 1826, and named for President Andrew Jackson (elected 1828). Jackson County is the most populated county in the Kansas City metropolitan area. Total employment in 2019 was 344,993.

Jackson County was home to members of the Osage Native American tribe. The first known European explorers were French trappers who used the Missouri River as a highway for explorations and trading with Native American tribes. Jackson County was a part of New France, until the British victory in the French and Indian War in 1763 resulted in the cession of this territory to Great Britain's ally, Spain. Spain was forced by the Third Treaty of San Ildefonso in 1800 to return its Louisiana Territory (of which modern Jackson County then formed a part) to France, which in turn sold it to the United States in the Louisiana Purchase of 1803.

Explorers Merriwether Lewis and William Clark passed through Jackson County on their famous Lewis and Clark expedition in 1804. Among other items, their report indicated a "high, commanding position" along the river within the current boundaries of Jackson County that in 1808 became Fort Osage. This stockade and trading post was one of the first U.S. military installations within the Louisiana purchase territory, and remained active until 1822.

In 1821, Jackson County became part of the newly admitted state of Missouri. Jackson County was organized on December 15, 1826 and named for Andrew Jackson, U.S. Senator (and later President) from Tennessee. Its county seat was designated as Independence, which was at the time only a minuscule settlement near a spring. However, the rapid increase in Westward exploration and expansion ultimately made Independence the starting point for three of the great Westward Trails: the Santa Fe Trail, the Oregon Trail and the California Trail. With the American Civil War and the coming of the railroads, nearby Kansas City ultimately eclipsed Independence, though both towns remain county seats.

In 1838, a small piece of land was bought along the Missouri River in northern Jackson County by the "Town Company," which established "Westport Landing" (today the River Market district). The area outside of Westport Landing was renamed the "Town of Kansas," after the local Kanza Native Americans, in 1839. The town was chartered by Jackson County in 1850 and incorporated by the State of Missouri as the "City of Kansas" in 1853. In 1889, with a population of around 60,000, the city adopted a new charter and changed its name to Kansas City. In 1897, Kansas City annexed Westport. 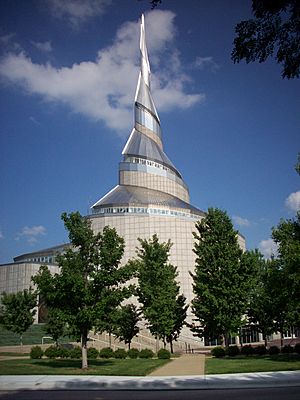 Jackson County figures prominently in the history of the Latter Day Saint movement. Although formed in upstate New York in 1830, in March 1831 Joseph Smith said that a location on the Missouri–Kansas border was to be the latter-day "New Jerusalem" with the "center place" located in Independence, the county seat. Traveling to the area in the Summer of 1831, Smith and some associates formally proclaimed Jackson County as the site, in a ceremony in August 1831.

"Joseph Smith was then told that the members of the Church should buy as much land as possible west from Independence up to the line that designated the land of the Native Americans. Learning that Jackson County Missouri was Zion meant much to Joseph Smith and the members of the Mormon Church. According to Mormon belief, Zion is a place where the pure in heart live. This can mean that Zion can be anywhere, but when God referred to Jackson County as Zion he also told Joseph that this land would be the New Jerusalem.
"...The saints were eager to begin building up Zion so that they could further the preparations for the coming of Christ.
"After receiving this revelation, Joseph began making arrangements to build up a city. On August 2, 1831, he helped lay the logs for the first house built in Zion. The first log was carried and placed by twelve men to represent the twelve tribes of Israel. Sidney Rigdon also was asked to dedicate and consecrate the land for the gathering of the Saints..."

Leadership and members of the Latter Day Saint movement began moving to Jackson County as soon as word of the August 1831 dedication ceremony was published. Open conflict with earlier settlers ensued, driven by religious and cultural differences, and the perception by pro-slavery Missourians that the "Yankee" "Mormons" were abolitionists. Vigilantes in the public and private sector used force to drive individual Saints from Jackson to nearby counties within Missouri; eventually, Latter Day Saints were given until the end of November 6, 1833 to leave the county en masse. On November 23, 1833, the few remaining Mormon residents were ordered to leave Jackson County. By mid-1839, following the Missouri Mormon War, Mormons were driven from the state altogether, not to return to Jackson County or Missouri in significant numbers until 1867.

Today several Latter Day Saint movement churches are headquartered in Jackson County, most notably the Community of Christ, the Church of Christ (Temple Lot), the Church of Jesus Christ (Cutlerite) and the Church of Christ with the Elijah Message. The Church of Jesus Christ of Latter-day Saints or LDS Church (the largest of the Latter Day Saint churches) has a strong presence in the county as well, though its headquarters is located in Salt Lake City, Utah. Joseph Smith prophesied that a temple would be built in Independence "in this generation". The Community of Christ remains the only one of the aforementioned (as of 2014) to have a temple in the city on part of the 66 acres (270,000 m2) larger temple area designated by Smith. Smith's original temple site, a smaller five-acre section within that 66 acres (containing stones originally placed by Smith to mark the corners of his intended structure), is currently owned by the Church of Christ (Temple Lot), which hopes to build a temple of its own sometime in the future.

Although the Kansas City Missouri Temple opened in May 2012 in adjacent Clay County, the LDS Church still believes that a temple will also be built on the Independence Temple Lot (currently owned by the Church of Christ (Temple Lot)) at some future time. An LDS visitors' center is currently situated adjacent to the Temple Lot, with the Community of Christ temple directly across the street.

Many early members of the Latter Day Saint movement—including Brigham Young—believed that Jackson County was the site of the biblical Garden of Eden. Others who believed this included Heber C. Kimball, and George Q. Cannon, but there are no surviving first-hand accounts of that doctrine being definitively taught by Joseph Smith himself. Official LDS Church doctrine is unclear as to the exact location of the Garden, but according to LDS tradition it is somewhere in Jackson County in the vicinity of Adam-ondi-Ahman (in nearby Daviess County).

During the Civil War, Jackson County was the scene of several engagements, the most notable of which was the Battle of Westport, sometimes referred to as "the Gettysburg of Missouri," in 1864. The Union victory here firmly established Northern control of Missouri, and led to the failure of Confederate General Sterling Price's Missouri expedition. Other noteworthy battles were fought in Independence in 1862, Lone Jack a few days later, and again in Independence in 1864. All three battles resulted in Confederate victories.

Jackson County was heavily affected by Union General Thomas Ewing's infamous General Order No. 11 (1863). With large numbers of Confederate sympathisers living within its boundaries, and active Confederate operations in the area a frequent occurrence, the Union command was determined to deprive Confederate bushwhackers of all local support. Ewing's decree practically emptied the rural portions of the county, and resulted in the burning of large portions of Jackson and adjacent counties. According to American artist George Caleb Bingham, himself a resident of Kansas City at the time, one could see the "dense columns of smoke arising in every direction", symbolic of what he termed "a ruthless military despotism which spared neither age, sex, character, nor condition". The legacy of Ewing's "imbecilic" (according to Bingham) order haunted Jackson County for decades after the war. 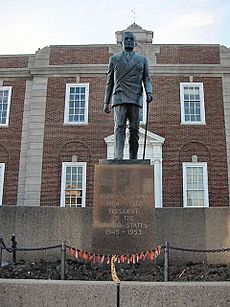 The coming of the railroads and the building of stockyards led to the rapid expansion of Kansas City in the late 19th century. During the 1920s and '30s, the city became a noted center for Jazz and Blues music, as well as the headquarters of Hallmark Cards and the location of Walt Disney's first animation studio. The county fared better than many during the Great Depression, as local political boss Thomas Pendergast worked for implementation of a $50,000,000 public works project that provided thousands of jobs (and a great deal of money for the corrupt Pendergast). One of Pendergast's political protegés was a young World War I veteran from Independence, Harry S. Truman, who had been his nephew's commanding officer in the war. Truman was elected Presiding Judge (equivalent to a County Executive) of Jackson County with Pendergast support in 1926, then went on to become a U.S. Senator from Missouri, Vice President, and in 1945, following the death of Franklin D. Roosevelt, the thirty-third President of the United States.

Suburban sprawl became a part of Jackson County's landscape following World War II, as returning soldiers and other workers moved into new homes being built in subdivisions that increasingly encroached on rural portions of the county. Independence, Blue Springs and Lee's Summit experienced growth during this period, which continues to the present. Kansas City, on the other hand, experienced the problems of urban decay that afflicted many large American cities during this period. Recent building projects have sought to reverse this trend, including work on the city's famous City Market, the Westport district, the 18th and Vine Historic District, and most recently the Kansas City Power & Light District. 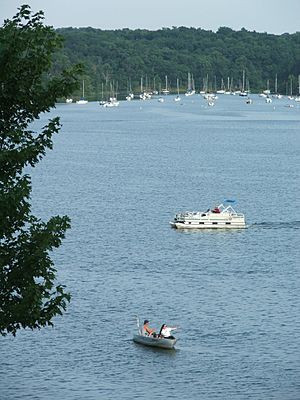 The Missouri River comprises Jackson County's northern border (with the exception of one small portion North of the river around the intersection of highway 291 and highway 210 as well as all of the 291 bridge). The county has historically been a major traveling point for American river travel. 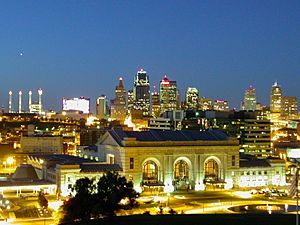 According to the Association of Religion Data Archives County Membership Report (2010), Jackson County is sometimes regarded as being on the northern edge of the Bible Belt, with evangelical Protestantism being the most predominant religion. The most predominant denominations among residents in Jackson County who adhere to a religion are Roman Catholics (19.51%), Southern Baptists (17.96%), and non-denominational evangelical Christians (11.52%).

All content from Kiddle encyclopedia articles (including the article images and facts) can be freely used under Attribution-ShareAlike license, unless stated otherwise. Cite this article:
Jackson County, Missouri Facts for Kids. Kiddle Encyclopedia.