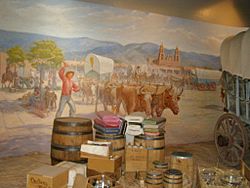 End of the trail in Santa Fe, New Mexico

The Santa Fe Trail was a 19th century transportation route through central North America. It connected Independence, Missouri with Santa Fe, New Mexico. It was pioneered in 1821 by William Becknell. The Santa Fe Trail served as a vital commercial highway until the introduction of the railroad to Santa Fe in 1880. Santa Fe was near the end of the El Camino Real de Tierra Adentro which carried trade from Mexico City.

The route skirted the northern edge and crossed the northwestern corner of Comancheria, the territory of the Comanches. they demanded payment for granting passage to the trail. Comanche raiding farther south in Mexico isolated New Mexico. This made the area more dependent on the American trade. It also provided the Comanches with a steady supply of horses. By the 1840s trail traffic along the Arkansas River valley was so heavy that bison herds could not reach important seasonal grazing land. This contributed to their decline which in turn hastened the decline of Comanche power in the region. The Trail was used as the 1846 U.S. invasion route of New Mexico during the Mexican–American War.

After the U.S. acquisition of the Southwest ending the Mexican–American War, the trail helped open the region new settlement. It played an important role in the expansion of the U.S. into the lands it had acquired.

The road route is commemorated today by the National Park Service as the Santa Fe National Historic Trail. A highway route that roughly follows the trail's path through the entire length of Kansas, the southeast corner of Colorado and northern New Mexico has been designated as the Santa Fe Trail National Scenic Byway. It is 565 metres (1,854 ft) long and takes about 12 hours to drive the trail today.

All content from Kiddle encyclopedia articles (including the article images and facts) can be freely used under Attribution-ShareAlike license, unless stated otherwise. Cite this article:
Santa Fe Trail Facts for Kids. Kiddle Encyclopedia.