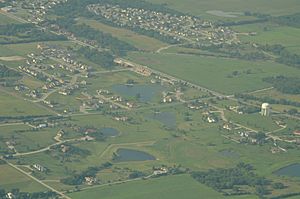 Baldwin City is a city in Douglas County, Kansas, United States about 12 miles (19 km) south of Lawrence and 15 miles (24 km) west of Gardner. As of the 2010 census, the city population was 4,515. The city is home to Baker University, the state's oldest four-year university. 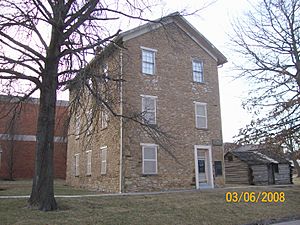 The Old Castle Museum, the first building constructed for Baker University. To the right is a replica of Kibbee Cabin.

Baldwin City began as a trail stop on the Santa Fe Trail named Palmyra. The small town consisted of a harness shop, blacksmith, hotel, lawyer, drug store, two doctors and a tavern. In 1858, a group of Methodist ministers gathered at Kibbee Cabin and founded Baker University. The town of Palmyra bought land to the south for the university and surrounding city. A main benefactor was John Baldwin and the town was named in his honor. Baldwin built a saw mill which was at present-day Fifth and Indiana Streets.

The first post office in the town, then called Palmyra, was established in June, 1857. Baldwin was incorporated on September 22, 1870.

Baldwin City unwittingly found themselves surrounded by the events that led up to the American Civil War. Three miles east of Baldwin was the town site of Black Jack where the Battle of Black Jack took place on June 2, 1856. The night before that battle, John Brown stayed in Prairie City. In 1863, Quantrill's raiders passed within three miles (5 km) of Baldwin after the burning of Lawrence.

In 1867, the Leavenworth, Lawrence and Fort Gibson railroad laid tracks and became the first Kansas railroad south of the Kansas River. In 1906, the Santa Fe Depot was built and today the Midland Railway offers over 20-mile round trip excursion rides to Ottawa via "Nowhere" and Norwood. Midland's Scout program is one of the few in the country to offer a railroading merit badge and Midland has hosted a Thomas the Tank Engine attraction the last few years.

Every year since 1957, Baldwin City has hosted the Maple Leaf Festival during the third full weekend in October. It began as a way to celebrate a successful harvest and to view the fall foliage. Today, it is the largest fall family event in the area and features a parade, arts and crafts, quilt show, theatrical performances, history tours, train rides and live music. Annually it draws crowds of 30,000 or more.

The area's climate is characterized by hot, humid summers and generally mild to cool winters. According to the Köppen Climate Classification system, Baldwin City has a humid subtropical climate, abbreviated "Cfa" on climate maps.

Baldwin City is part of the Lawrence Metropolitan Statistical Area.

There were 1,501 households of which 37.5% had children under the age of 18 living with them, 52.6% were married couples living together, 10.2% had a female householder with no husband present, 4.5% had a male householder with no wife present, and 32.6% were non-families. 26.8% of all households were made up of individuals and 12.1% had someone living alone who was 65 years of age or older. The average household size was 2.54 and the average family size was 3.08.

There were 1,077 households out of which 39.6% had children under the age of 18 living with them, 57.8% were married couples living together, 10.4% had a female householder with no husband present, and 28.1% were non-families. 24.8% of all households were made up of individuals and 10.0% had someone living alone who was 65 years of age or older. The average household size was 2.59 and the average family size was 3.10.

All content from Kiddle encyclopedia articles (including the article images and facts) can be freely used under Attribution-ShareAlike license, unless stated otherwise. Cite this article:
Baldwin City, Kansas Facts for Kids. Kiddle Encyclopedia.