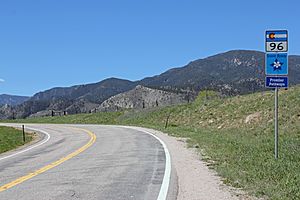 The Frontier Pathways National Scenic and Historic Byway as it passes through Wetmore, Custer County, Colorado 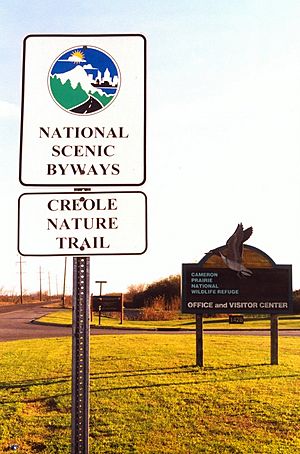 A National Scenic Byway is a road recognized by the United States Department of Transportation for one or more of six "intrinsic qualities": archeological, cultural, historic, natural, recreational, and scenic. The program was established by Congress in 1991 to preserve and protect the nation's scenic but often less-traveled roads and promote tourism and economic development. The National Scenic Byways Program (NSBP) is administered by the Federal Highway Administration (FHWA).

The most scenic byways are designated All-American Roads, which must meet two out of the six intrinsic qualities. The designation means they have features that do not exist elsewhere in the United States and are unique and important enough to be tourist destinations unto themselves. As of January 21, 2021, there are 184 National Scenic Byways located in 48 states (all except Hawaii, and Texas).

The NSBP was established under the Intermodal Surface Transportation Efficiency Act of 1991, which provided $74.3 million in discretionary grants. On May 18, 1995, FHWA specified the intrinsic qualities that would serve as criteria for designating road as National Scenic Byways or All-American Roads. In September U.S. Transportation Secretary Federico Peña announced the first 14 National Scenic Byways and six All-American Roads. On June 9, 1998, the Transportation Equity Act for the 21st Century (TEA-21) provided $148 million to states so they could develop state roads to take advantage of the program.

A corridor management plan must also be developed, with community involvement, and the plan "should provide for the conservation and enhancement of the byway's intrinsic qualities as well as the promotion of tourism and economic development". The plan includes, but is not limited to:

Corridor management plans for All-American Roads must also include:

The final step is when the highway (or highways) is approved for designation by the United States Secretary of Transportation.

All content from Kiddle encyclopedia articles (including the article images and facts) can be freely used under Attribution-ShareAlike license, unless stated otherwise. Cite this article:
National Scenic Byway Facts for Kids. Kiddle Encyclopedia.