Founded in 1802, Lawrenceburg was named for the maiden name of founder Samuel C. Vance's wife.

In the 19th century Lawrenceburg became an important trading center for riverboats on the Ohio River. 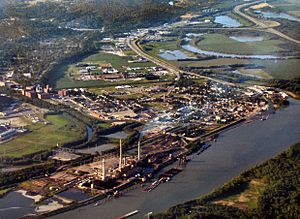 Tanner's Creek Generating Station and the city of Lawrenceburg

Lawrenceburg is also home to Perfect North Slopes, a ski area located off Route 1. It boasts hills for skiing, snowboarding, and snowing tubing. It has been family owned and operated by the Perfect Family for many years and is open throughout the winter months (weather permitting).

Hollywood Casino Lawrenceburg (formerly Argosy Casino) is found in Lawrenceburg, and is the closest Indiana riverboat casino to downtown Cincinnati. 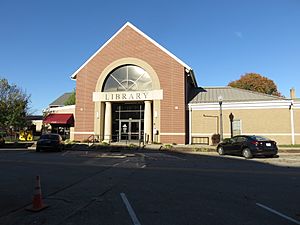 All content from Kiddle encyclopedia articles (including the article images and facts) can be freely used under Attribution-ShareAlike license, unless stated otherwise. Cite this article:
Lawrenceburg, Indiana Facts for Kids. Kiddle Encyclopedia.