Milford is a coastal city in New Haven County, Connecticut, United States, located between New Haven and Bridgeport. The population was estimated to be 53,195 in a July 2019 estimate. The city includes the village of Devon and the borough of Woodmont. Milford is part of the New York-Newark Bridgeport, NY-NJ-CT-PA Combined Statistical Area.

The land which today comprises Milford, Orange and West Haven was purchased on February 1, 1639 from Ansantawae, chief of the local Paugussets (an Algonquian tribe) by English settlers affiliated with the contemporary New Haven Colony. Originally, the area was known as "Wepawaug", after the small river which runs through the town, and which has given its name to several streets in both Milford and Orange. 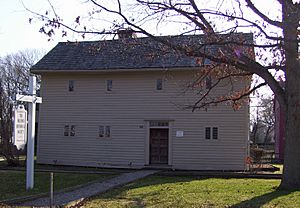 The Eells-Stow House, circa 1700, is believed to be the oldest extant house in Milford

A grist mill was first built over the Wepawaug River in 1640.

During the Revolutionary War the Milford section of the Boston Post Road, a vital route connecting Boston, New York and other major coastal cities, was blockaded by Continental forces, and Fort Trumbull was constructed to protect the town. The site of the blockade is commemorated by the Liberty Rock monument. 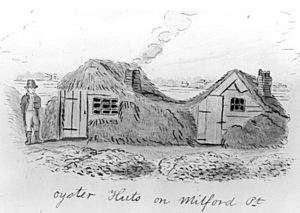 Oyster Huts on Milford Point, a sketch by John Warner Barber for his Historical Collections of Connecticut (1836). Barber wrote that he found 15 or 20 of these seaweed-covered huts along the shore when he visited the town in 1836. Oystermen used the huts in the winter.

By 1822, the town had grown large enough that residents in the northern and eastern sections of Milford chartered their own independent course as the town of Orange. During the next century and a half, the remaining section of Milford was known for shipbuilding, farming and oystering, although a small subset of industrial facilities also developed in town. During this time, Milford also became known as a beach resort for residents of New Haven and Bridgeport.

Interestingly, the boundaries of the final town charter granted by the State of Connecticut in 1899 to Laurel Beach are contained entirely within Milford. Residents of Laurel Beach must therefore pay taxes to both Laurel Beach as well as Milford, and all mail to Laurel Beach residents is mailed to Milford. 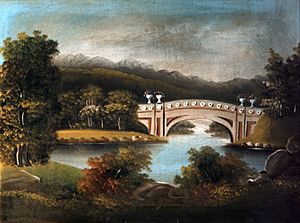 View of Milford's greens on a 19th-century naïve landscape painting

Also in 1899, the "Memorial Bridge" (a "stone bridge and tower commemorating the town's history and founders") was built at the site of the last mill over the Wepawaug after it was closed in 1894. "The stone bridge is simple in design, its broad copings surmounted with rough hewn blocks of granite, bearing the names of the first settlers. There are ten blocks on the south and twenty on the north coping. At each end of the former is a stone four feet wide by five and a half high." It is located where Broad Street crosses the Wepawaug River. 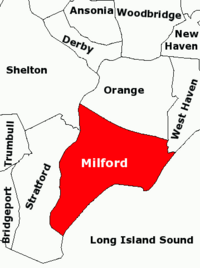 Milford was one of the early settlements in south central Connecticut and, over time, gave rise to several new towns that broke off and incorporated separately. The following is a list of towns created from parts of Milford.

The "oatmeal lots" of Liberty Park

Starting in 1902, Quaker Oats oatmeal boxes came with a coupon redeemable for the legal deed to a tiny lot in Milford. The lots, sometimes as small as 10 feet (3 m) by 10 feet, were carved out of a 15-acre (6.1 ha) tract in a never-built subdivision called "Liberty Park". A small number of children (or their parents), often residents living near Milford, collected the deeds and started paying the extremely small property taxes on the "oatmeal lots". The developer of the prospective subdivision hoped the landowners would hire him to build homes on the lots, although several lots would need to be combined before building could start. Since the subdivision into small lots predated Milford's planning and zoning regulations, the deeds were entirely legal, although they created a large amount of paperwork for town tax collectors, who frequently couldn't find the property owners and received almost no tax revenue from the lots.

In the mid-1970s, when the town wanted to develop the area, town officials put an end to the oatmeal lots in a "general foreclosure" that avoided the enormous expense of individual foreclosures by condemning nearly all of the property in one legal filing. One of the streets in the Liberty Park subdivision plans, Shelland Street, was later built in the late 1990s as an access road to the Milford Power Company. The site is currently home to the BIC Corporation's lighter factory at 565 Bic Drive. (In a separate land giveaway in 1955 tied to the Sergeant Preston of the Yukon television show, Quaker Oats offered in its Puffed Wheat and Puffed Rice cereal boxes genuine deeds to land in the Klondike.)

In the post-World War II period, Milford—like many Connecticut towns—underwent significant suburbanization. Interstate 95 was routed through town, and the Milford section was completed in 1958.

The 1960s and 1970s witnessed the construction of the Connecticut Post Mall, one of the state's largest shopping malls, and the extensive commercial development of the town's stretch of the Boston Post Road. One notable small business located on the Boston Post Road during the 1970s was SCELBI Computer Consulting, credited by many as being the world's first personal-computer manufacturer. Starting in 1975, the city began hosting the Milford Oyster Festival, which has since become firmly established as an annual Milford tradition that is held "rain or shine".

The city became host to several headquarters of multinational corporations, including the Schick Shaving company, and Doctor's Associates, Inc., owners of the Subway chain of fast-food restaurants. The US operations of BIC were headquartered in Milford, but in March 2008 moved most of its operations to Shelton. Milford Hospital has also developed into an important health care resource for the area. It has also become home of smaller national corporations such as K-Mart and Orchid Medical. 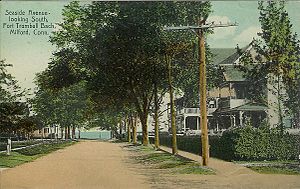 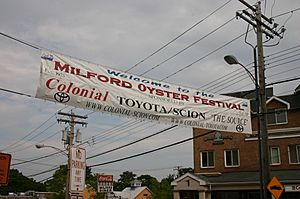 Every year on the third Saturday in August, Milford celebrates its annual Oyster Festival, which serves as a combination of a typical town fair with a culinary celebration of the town's location on historically shellfish-rich Long Island Sound. This festival takes place in and around the Milford Green, near the center of town, as well as in various locations throughout the downtown area, and features a wide variety of events including canoe and kayak races, musical performances, and classic car shows.

The Milford Oyster Festival has drawn large musical acts over the years including Joan Jett, The Marshall Tucker Band, John Cafferty & The Beaver Brown Band, Soul Asylum, and many more.

There are also other features such as carnival rides, food stands, crafts, face painting, and even opening your own oyster for a pearl.

The Milford Cultural Center, operated by the Milford Council for the Arts, offers various events throughout the year. The Firehouse Art Gallery was recently opened in Devon. The beach resort quality of the town lives on, with several rocky beaches, Silver Sands State Park, the Connecticut Audubon Society Coastal Center at Milford Point, Charles Island, two golf courses, and numerous other recreational facilities available for residents and tourists.

Starting in 2011, the Walnut Beach Concert Series has taken place under the pavilion at Walnut Beach. It features a different band playing every Sunday afternoon during the summer.

Milford's Devon neighborhood is located at the mouth of the Housatonic River near Stratford, and features the Connecticut Audubon Coastal Center overlooking the estuary. 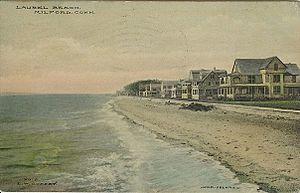 Milford has over 14 miles (23 km) of shoreline facing Long Island Sound, the most of any town in Connecticut. A large portion of Milford's shoreline forms the Silver Sands State Park. A newly built 3/4 mile boardwalk was opened in 2011 that connects Silver Sands to Walnut Beach in Devon. Charles Island is also a part of the park and is a protected bird nesting ground. There is a sand bar (called a tombolo since it is perpendicular, not parallel to the coast) accessible during low tide that people can walk on from Silver Sands Beach to Charles Island.

The island is a part of the Hamonasset-Ledyard Moraine and was formed as glaciers retreated at the end of the last ice age. The Wisconsin glaciation formed drumlins in Milford: Clark, Burwell, Eels, Bryan and Merwin hills.

Milford owns three islands in the Housatonic River: Fowler Island, just to the south of the Igor I. Sikorsky Memorial Bridge, Duck Island, and Nells Island, both near the mouth of the river. In addition to Silver Sands State Park, Milford has five public beaches with lifeguard services for its residents - Gulf Beach, Anchor Beach, Hawley Avenue Beach, Walnut Beach, and Middle Beach - as well as seven private beaches.

Interstate 95 and U.S. Route 1 pass through the southern part of Milford. The Wilbur Cross Parkway cuts across the northern part of the city and is connected to I-95 and Route 1 via the Milford Parkway, also known as the Daniel S. Wasson connector, named for the first police officer to die in the line of duty in the city of Milford. He was killed on April 12, 1987, when he was shot by a motorist he had pulled over. The Metro-North New Haven Line has a station stop in downtown Milford (Milford station). The Milford Transit District provides in-town service to major attractions. Connections with the Greater Bridgeport Transit Authority and Connecticut Transit New Haven are also available.

Of the aforementioned households 29.3% had children under the age of 18 living with them, 54.7% were married couples living together, 9.7% had a female householder with no husband present, and 32.4% were non-families. 26.3% of all households were made up of individuals, and 10.3% had someone living alone who was 65 years of age or older. The average household size was 2.49 and the average family size was 3.04.

Milford High School operated for 141 years at the time of its closing in June, 1983. It was the first public high school to operate in Milford, beginning in 1842. The former Milford High School building is now the Parson's Government building.

St. Gabriel's School opened in 1965; at the time clergy were the primary teachers. By the 2010s there were fewer clergy teachers, and lay teachers were more expensive; in addition fewer parishioners gave money to the church. By 2016 the school's budget was $111,709 in deficit. In 2008-2009 it had a peak enrollment of 219. In 2014 there was concern expressed about the school's survival expressed in the community, and in 2016 enrollment was down to 139, with 22 being in special education. The school directors chose to close the school in June 2016; the archdiocese did not order the closure.

All content from Kiddle encyclopedia articles (including the article images and facts) can be freely used under Attribution-ShareAlike license, unless stated otherwise. Cite this article:
Milford, Connecticut Facts for Kids. Kiddle Encyclopedia.