Stratford is a town in Fairfield County, Connecticut, United States, located on Long Island Sound at the mouth of the Housatonic River. Stratford is in the Bridgeport-Stamford-Norwalk Metropolitan Statistical Area. It was founded by Puritans in 1639.

The population was 51,384 as of the 2010 census. It has a historical legacy in aviation, the military, and theater. Stratford is bordered on the west by Bridgeport, to the north by Trumbull and Shelton, and on the east by Milford (across the Housatonic River). 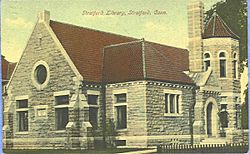 Stratford Public Library, as seen in a 1909 postcard 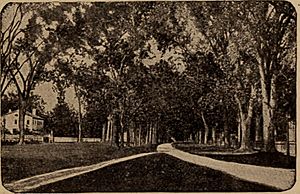 Street of the Triple Elms, as seen in the 1890s

Stratford was founded in 1639 as "the plantation at Pequonnocke", by Puritan leader Reverend Adam Blakeman, William Beardsley, and either 16 families—according to legend—or approximately 35 families—suggested by later research—who had recently arrived in Connecticut from England seeking religious freedom. In 1640 the community was known as Cupheag Plantation. By April 13, 1643, the growing town was known as Stratford, changed to honor Stratford-upon-Avon in England.

Stratford is one of many towns in the northeastern American colonies founded as part of the Great Migration in the 1630s when Puritan families fled an increasingly polarized England in the decade before the civil war between Charles I and Parliament (led by Oliver Cromwell). Some of the Stratford settlers were from families who had first moved from England to the Netherlands to seek religious freedom, like their predecessors on the Mayflower, and decided to come to the New World when their children began to adopt the Dutch culture and language.

Like other Puritan or Pilgrim towns founded during this time, early Stratford was a place where church leadership and town leadership were united under the pastor of the church, in this case Reverend Blakeman. The goal of these communities was to create perfect outposts of religious idealism where the wilderness would separate them from the interference of kings, parliaments, or any other secular authority.

Blakeman ruled Stratford until his death in 1665, but as the second generation of Stratford grew up, many of the children rejected what they perceived as the exceptional austerity of the town's founders. This and later generations sought to change the religious dictums of their elders, and the utopian nature of Stratford and similar communities was gradually replaced with more standard colonial administration. By the late 17th century, the Connecticut government had assumed political control over Stratford.

Many descendants of the original founding Puritan families remain in Stratford today after over 350 years; for centuries they often intermarried within the original small group of 17th century Pilgrim families. Despite its Puritan origins, Stratford was the site of the first Anglican church in Connecticut, founded in 1707 and ministered by the Rev. Dr. Samuel Johnson. Settlers from Stratford went on to found other American cities and towns, including Newark, New Jersey, established in 1666 by members of the Stratford founding families who believed the town's religious purity had been compromised by the changes after Blakeman's death. Other towns such as Cambria, New York (now Lockport, New York) were founded or expanded around new churches by Stratford descendants taking part in the westward migration. U.S. President Gerald Ford was a descendant of one of the Stratford founding families, that was led by William Judson.

Stratford was one of the two principal settlements in southwestern Connecticut, the other being Fairfield. Over time it gave rise to several new towns that broke off and incorporated separately. The following towns were created from parts of Stratford:

The town contains five islands, all in the Housatonic River. These are Carting Island, Long Island, Peacock Island, and Pope's Flat north of Interstate 95, as well as Goose Island. None of these islands are habitable because of their low elevations. A sixth island known as Brinsmade Island washed away prior to 1964.

Town beach stickers are free for residents and $100/season for non-residents with daily rates available.

Long Beach – Approximately 1.5 miles (2.4 km) long, the eastern end of the beach is open to the public and has parking and lifeguards. The central part of the beach is a nature preserve whose land is set aside for wildlife, particularly nesting seabirds, such as kestrels and ospreys. The western end of the beach was once the site of about 40 cottages, which were abandoned because of the town's discontinuation of the lease to the land . The cottages were demolished in fall 2010.

Russian Beach – Located between Long and Short beaches, Russian Beach has parking and the Point-No-Point walkway. Fishing is allowed, as is swimming although this beach has no lifeguards.

Short Beach – Short Beach Park is 30 acres (120,000 m2) in size and sits at the mouth of the Housatonic River. It has three picnic pavilions, basketball courts, tennis courts, volleyball courts, a handicapped-accessible playground, a skateboard park, a lighted softball field, a soccer field, two baseball fields and a lacrosse field. The beach has 1,000 feet (300 m) of frontage with a concession stand, bathrooms, a deck and lifeguards. The park is also home to Short Beach Golf Course, a nine-hole par-3 course.

The Great Meadows Unit of the Stewart B. McKinney National Wildlife Refuge is a key bird migration stopover. The open water area of the Great Salt Marsh is known as Lewis Gut.

Located in the north end of Stratford, this 250-acre (1.0 km2) site is primarily a mixed deciduous forest, with some wetlands and ponds. Named for President Franklin D. Roosevelt, it was set aside in the 1930s, when much of the infrastructure was created as a Works Progress Administration project. The forest includes campsites with cooking pits, picnic tables, a playground, restrooms, and walking trails. 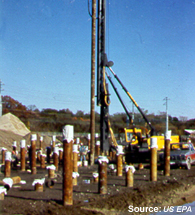 Cleanup of a Raymark Industries Superfund site, in Stratford

Stratford is the location of two Superfund sites designated by the United States Environmental Protection Agency. These include a variety of locations related to asbestos dumping and disposal by Raymark Industries, whose manufacturing was previously headquartered in Stratford, and the former Stratford Army Engine Plant. The Raymark site is on the EPA's National Priorities List. Stratford Army Engine Plant is not on the National Priorities list, but is being cleaned up by the US Army.

From 1919 to 1989, Raymark manufactured brake pads and other friction products for the automobile industry under the name Raybestos. The company disposed of wastes containing lead, asbestos, PCBs and other hazardous substances at its Stratford manufacturing plant. Raymark dried the waste material and made it available for use as fill material for lawns, playgrounds, and schoolyards. In 1993, the EPA and the Connecticut Department of Environmental Protection began working together to complete the cleanup of contamination Raymark left behind in Stratford. EPA completed its cleanup of the contaminated residential properties in 1995 and the former Raymark plant property in 1997. Plans for cleanup of the Ferry Creek area and surrounding properties where additional Raymark waste was historically disposed are currently being developed by the EPA. The cost of cleaning up the Raymark Site is estimated to have exceeded $200 million.

Although owned by the City of Bridgeport, Sikorsky Memorial Airport is located in Stratford. The 800-acre (3.2 km2) facility includes two paved runways (both under 4800 feet), a helipad, and two hangars. It provides helicopter service to New York and the Downtown Manhattan Heliport and is used as a landing site for blimps and small aircraft. In 2007, 241 aircraft were based at the airport, with an average of 212 operations per day.

Stratford (Metro-North station) is a stop on the New Haven Line, 59 miles (95 km) east of Grand Central Terminal. Average travel time into Manhattan is about 90 minutes. The station platforms are only long enough to handle four cars and the station has limited parking for fewer than 300 vehicles. It has three ticket machines, a bus connection to neighboring Bridgeport, and handicapped access.

In January 1983 a truck slammed into a line of cars waiting to pay a toll on Interstate 95 in Stratford, killing seven people. This accident was one of the reasons toll booths were removed throughout the state.

Located in the former Stratford railroad station, the National Helicopter Museum contains a photographic history of the helicopter and model helicopters. 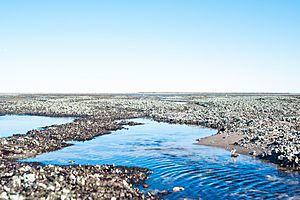 Oysters at low tide. Short Beach is open from sunrise to sunset. 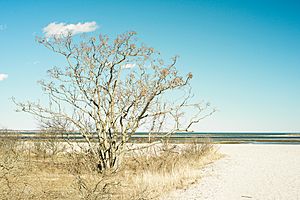 The 30-acre (120,000 m2) Boothe homestead in the Putney area of Stratford is a rolling parkland containing the original Boothe homestead and an eclectic assortment of buildings collected by the Boothe brothers during their lives and added to by the Friends of Boothe.

A tollbooth that was in service from 1940 to 1988 on Connecticut's Merritt Parkway is on display in Boothe Memorial Park.

The company operating the theater ceased operations in the mid-1980s, and the building has been vacant since then. In February 2005, the Town of Stratford received the deed for the Stratford Festival Shakespeare Theater from the state of Connecticut. In 2006 it selected a New York City development company to reopen the theater as a tourist destination, but the company's contract was terminated in July 2007 because of lack of progress. Three months later the town issued a request for proposals for an architectural assessment of the needs of the theater building.

Since 2002, the Hudson Shakespeare Company has brought their Shakespeare in the Park tours to the amphitheater behind Stratford Library. Each year the troupe presents one showing at the library, usually falling on the last Saturday in each month. The library's lecture room, the Lovell Room, is used in case of inclement weather.

Since 1932, Sterling House has served as a community center for Stratford. Housed in a donated 1886 Romanesque mansion that was previously the home of John William Sterling, it hosts recreational and leisure activities for adults and children, charity events, and volunteer activities. The grounds include a gazebo, a rose garden, and a 2-acre (8,100 m2) field.

The town of Stratford has over 25 houses of worship representing numerous faiths.

All content from Kiddle encyclopedia articles (including the article images and facts) can be freely used under Attribution-ShareAlike license, unless stated otherwise. Cite this article:
Stratford, Connecticut Facts for Kids. Kiddle Encyclopedia.