Stratford is a town on the Avon River in Victoria, Australia, 232 kilometres (144 mi) east of Melbourne on the Princes Highway in Shire of Wellington. At the 2006 census, Stratford had a population of 1950. The town services the local regional community and travellers on the Princes Highway. Stratford's principal industries are dairying, sheep, cattle and horse breeding and vegetable crops. The town has numerous coffee shops and cafes, a cellar door for a local winery, Design Gallery, model railway shop, a pub, parks and playgrounds for car travelers to break their journey. 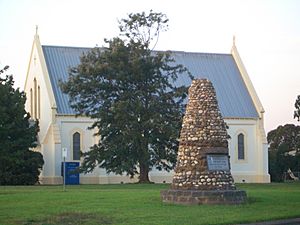 A church and a memorial to Angus McMillan

The land around the Avon River was occupied by the Brayakuloong people of the Gunai/Kurnai indigenous nation for thousands of years prior to European settlement.

Angus McMillan named the Avon River after the river of the same name in his native Scotland. In 1840 he established a pastoral run at Bushy Park, north-west of the township. William Odell Raymond established a run in the area in 1842, and built his house, Strathfieldsaye, during 1848–54. European settlement did not take place without resistance, and in return, massacres were inflicted by Angus McMillan and others on Gunai people, especially between the years of 1840 and 1850.

The township was established in the late 1850s and the Post Office opened on 1 May 1858.

In 1863 Reverend Friedrich Hagenauer established Ramahyuck Mission on the banks of the Avon River near Lake Wellington to house the Ganai survivors from west and central Gippsland. The name combines "Ramah", the home of Samuel in the First Book of Kings, with "yuck", an Aboriginal term reputedly meaning "our place". The mission sought to discourage all tribal ritual and culture, and replace it with Christian values and European customs. The Mission closed in 1908 and the few remaining residents were moved to Lake Tyers Mission.

The town has an Australian rules football team, nicknamed the Swans; who have been competing in the East Gippsland Football League since 2012. They had previously competed in the North Gippsland Football League from 2004 to 2011. The town has a cricket team competing in the Sale-Maffra Cricket Association. They have won 4 A-Grade premierships since reforming in 1978.

All content from Kiddle encyclopedia articles (including the article images and facts) can be freely used under Attribution-ShareAlike license, unless stated otherwise. Cite this article:
Stratford, Victoria Facts for Kids. Kiddle Encyclopedia.