Agate is a kind of quartz and it is a mineral. Agate can come in many different kinds and colors. Agate deposits are primarily found in large rocks such as boulders. Agates take 50 million years to form. It is characterized by colored band patterns inside various rocks. Often, agates are also accompanied by Amethyst deposits inside as well as Quartz-like crystals occurring in larger deposits.

Agate is one of the most common materials used in the art of hardstone carving, and has been recovered at a number of ancient sites, indicating its widespread use in the ancient world; for example, archaeological recovery at the Knossos site on Crete illustrates its role in Bronze Age Minoan culture.

The stone was given its name by Theophrastus, a Greek philosopher and naturalist, who discovered the stone along the shore line of the river Achates in present-day Sicily, sometime between the 4th and 3rd centuries BC. colorful agates and other chalcedonies were obtained over 3,000 years ago from the Achates River, now called Dirillo. 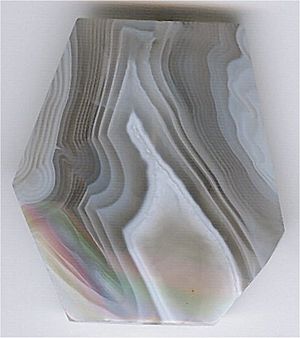 Most agates occur as nodules in volcanic rocks or ancient lavas. Agate has also been known to fill veins or cracks in volcanic or altered rock underlain by granitic intrusive masses. Such agates, when cut transversely, exhibit a succession of parallel lines, often of extreme tenuity, giving a banded appearance to the section. Such stones are known as banded agate, riband agate and striped agate.

Many agates are hollow, since deposition has not proceeded far enough to fill the cavity, and in such cases the last deposit commonly consists of drusy quartz, sometimes amethystine, having the apices of the crystals directed towards the free space so as to form a crystal-lined cavity or geode.

The agates are extremely resistant to weathering and remain as nodules in the soil, or are deposited as gravel in streams and along shorelines.

Uses in industry and art 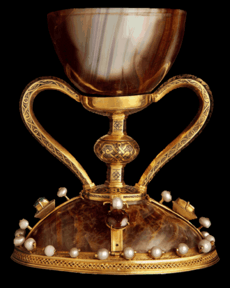 The Holy Grail of Valencia, with the cup made from a piece of agate carved during the time of Christ

Industrial uses of agate exploit its hardness, ability to retain a highly polished surface finish and resistance to chemical attack. It has traditionally been used to make knife-edge bearings for laboratory balances and precision pendulums, and sometimes to make mortars and pestles to crush and mix chemicals. It has also been used for centuries for leather burnishing tools.

The decorative arts use it to make ornaments such as pins, brooches or other types of jewellery, paper knives, inkstands, marbles and seals. Agate is also still used today for decorative displays. Agates have long been used in arts and crafts. The sanctuary of a Presbyterian church in Yachats, Oregon, has six windows with panes made of agates collected from the local beaches.

Respiratory diseases such as silicosis and higher incidence of tuberculosis among workers involved in the agate industry has been reported from India and China.

All content from Kiddle encyclopedia articles (including the article images and facts) can be freely used under Attribution-ShareAlike license, unless stated otherwise. Cite this article:
Agate Facts for Kids. Kiddle Encyclopedia.