Sale is a city situated in the Gippsland region of the Australian state of Victoria. It had an estimated urban population of 14,716 at June 2015. Sale has seen much development and redevelopment in the past decade, one example being the multimillion-dollar redevelopment of the city's Port of Sale.

Two famous Gippsland explorers, Paul Strzelecki and Angus McMillan, passed through the immediate area around 1840. The first white settler was Archibald McIntosh who arrived in 1844 and established his 'Flooding Creek' property on the flood plain country which was duly inundated soon after his arrival.

In the 1840s, drovers heading south to Port Albert crossed Flooding Creek and were confronted with the difficult marsh country around the Thomson and Latrobe rivers. A punt operated across the Latrobe River until a toll bridge was erected. A Post Office named Flooding Creek opened here on 30 September 1848 being renamed, somewhat belatedly, as Sale on 1 January 1854.

The first town plots went on sale in 1850. When the new settlement was gazetted in 1851 it was named 'Sale' — a tribute to General Sir Robert Sale, a British army officer who won fame in the first Afghan war before being killed in battle in India in 1845. An SBS TV documentary "Afghanistan: The Great Game" claims that it is actually named after his wife, Lady Florentia Sale (1790-1853), who wrote a famous journal of her experiences during the First Afghan War which became a best seller in the 1840s and was serialised in The Times (UK) and possibly in Australia. Certainly, her letters to her husband were enthusiastically published in Australian papers.

The town greatly benefitted from the 1851 gold rush at Omeo as it was situated on the Port Albert to Omeo route and was an important base for the goldfields, until the arrival of the railways. It was also an important service centre for East Gippsland and the Monaro Plains of New South Wales. A building boom took place c. 1855–65.

In 1863 the population of Sale reached 1800 and it became a borough. The courthouse opened the following year. Shops, hotels and offices spilled over into Raymond Street and the first Anglican Church was erected on the site now occupied by St Anne's and Gippsland Grammar School. The Gippsland Times newspaper was established in 1861 while the first Star Hotel and the Criterion Hotel were built in 1865.

St Paul's Cathedral is the cathedral church of the Anglican Diocese of Gippsland in Australia. The cathedral building, built in 1884, is a double-storey building with a rectangular footprint and is constructed of red brick and slate roofing. 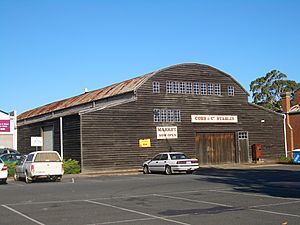 In terms of access, the first reasonable road from Melbourne arrived in 1865 and Cobb and Co established a rough-and-ready 24-hour coach service linking Melbourne and Sale. The Latrobe Wharf was built in the 1870s and two hotels emerged to exploit the new centre of activity. It was located near the present swing bridge although little is left.

Anthony Trollope visited Sale in 1872. Writing of the experience in Australia and New Zealand (1873) he spoke of the town's 'innumerable hotels' and concluded from his impressions that the Aborigines had little chance of surviving as a race. The children's author Mary Grant Bruce was born in the town in 1878.

A two-storey post office, with clock tower, was built in 1884 (it was demolished in 1963). HM Prison Sale was completed in 1887 and it operated for 110 years until it was replaced by a private Fulham Correctional Centre. The building has since been demolished, with only part of the large brick fencing still remaining. The site remained empty until 2014 when construction of the new Sale Police Station commenced there. It opened in March 2015. 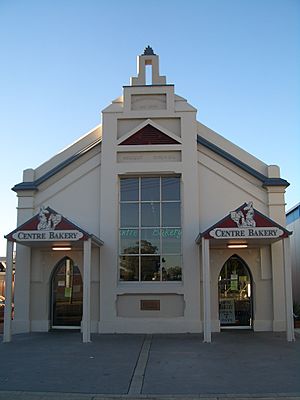 With the growth of shipping on the local waterways and the Gippsland Lakes (and the establishment of a railhead at Sale in 1879) schemes emerged to develop Sale as a port. The construction of the Sale Canal (complete with turning circle) duly commenced in the 1880s, thereby linking the town via the Thomson River and the Gippsland Lakes to the open sea. It was completed in 1890. Other elements were the Sale Swing Bridge, completed in 1883, a high wharf, and a launching ramp which still exists in the heart of the city. However, neither the bridge nor the canal created the desired surge of trade and the depression of the 1890s soon engulfed the town. Sale became a town in 1924 and a city in 1950.

In World War II, the West Sale RAAF base was the landing site of 2 Japanese Mitsubishi Zeros.

Sale has a moderate oceanic climate (Cfb) made up of warm summers, mild autumns and springs and cool winters. Sale records 595.9 mm (23.4 in) of measurable precipitation per year, making it drier than the nearby state capital, Melbourne. The wettest month is November whilst the driest is July. At 54.8 days, it gets more clear days than Melbourne (48 days). 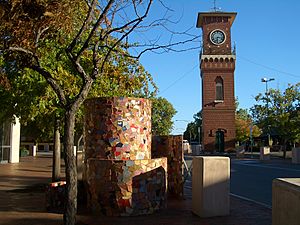 In the town centre

After oil was discovered offshore in 1965, the town experienced a boom period when it became the service and residential base of the Esso-BHP oil and gas exploration and development program. The unprocessed oil and gas is pumped through 700 kilometres (430 mi) of undersea pipes to Longford, 19 kilometres (12 mi) south of Sale. There the hydrocarbons are removed and used to produce LPG and ethane. The gas is piped to Melbourne and the oil to Westernport Bay and thence to Geelong and Altona from where it is shipped interstate and overseas.

An oil and gas display centre in Sale outlines the formation, exploration and drilling processes. Esso's Longford gas plant was the site of a major explosion on 25 September 1998 which killed two employees and crippled the state's gas supplies for a period of two weeks. Previously, Sale was significant as an office centre for the Esso corporation but these operations were relocated around 1990, leaving only a gas processing facility in nearby Longford.

Sale is linked by rail to Melbourne and Bairnsdale by the Bairnsdale V/Line rail service that stops at the local railway station. Until 1983 the station was situated in the centre of town, on what is now the Gippsland Centre shopping centre.

The city is located at the junction of the Princes Highway and the northeastern end of the South Gippsland Highway.

Fulham Correctional Centre, a medium security prison, is in the locality of Fulham to the west of Sale. 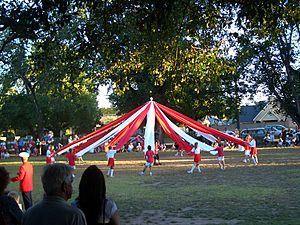 The March Labour Day weekend witnesses the Marley Point Overnight Yacht Race which is the longest overnight inland yacht race in the world. It begins near Sale and concludes at Paynesville, some 60 km away.

A Sale attraction is Lake Guthridge, a low lying retention basin, which features a park for children, barbecues, and a walking trail around the lake and car parking facilities. Prior to refurbishment in the mid-1990s Lake Guthridge suffered a blue-green algae problem that resulted in widespread fish mortality until local joggers and nearby residents complained of the associated stench causing council to act. Lake Guthridge has never been used as a food source.

A significantly superior natural waterway of historical significance is the aforementioned Port of Sale (previously Sale Canal), the original inspiration for the early town's original name - Flooding Creek. The Canal connects to other local rivers and lakes, leading eventually to Lakes Entrance, an ocean side tourist resort situated near a managed, naturally occurring channel connecting the Gippsland Lakes to Bass Strait. Once steam boats and ocean-going craft were able to journey from Lakes Entrance to Sale, arriving at the docks at Sale to ferry passengers and goods from Eastern Victoria, although its success in such a role was short lived.

In recent years, a grassroots effort helped to persuade the local council to invest in restoration of the foreshore and to protect against erosion. Prior to the rise of Common Carp as the predominant fish species due to nutrient overload from agricultural runoff, Sale Canal featured pristine waters and native fish stocks. The Sale Regatta is run yearly on a long straight section of the canal headed towards Longford. Visitors to Sale are usually unaware of the Canal, including its restoration, due to roadside views of it being blocked by the former Esso corporation headquarters, half of which is commercially let office space and the other half currently being re-developed into a multimillion-dollar Library and Art Gallery.

Sale is home to the Gippsland Art Gallery, a major Victorian public gallery. The gallery presents a diverse exhibition program of contemporary, modern and historical exhibitions, with a focus on the landscape of South Eastern Australia. The gallery holds a collection of nearly 1,000 artworks, with a small selection on permanent view.

A fishing contest is held at Lake Guthridge every Easter and the Sale Music Festival at Gippsland Grammar School in June. The Sale Art Exhibition is held over August and September, while the Sale show falls in October.

As a tribute to the late King George V, an elm-lined section of the Princes Highway is named King George V Avenue.

On 30 May 2009, Sale hosted Triple J's One Night Stand at the Sale Football Ground. Sale also has a strong underground music scene; events are held every few months and attract scores of young people.

Every Saturday, Sunday, and Monday, the Gippsland Armed Forces Museum is open, featuring local military and significant history and artifacts. In recent times it has moved from its original location on Punt Lane to a bigger building at West Sale Airfield, after the original building was purchased for development works. The museum pays homage to the 13th Australian Light Horse Regiment, among others.

The Sale Swing Bridge is the only one left in the world that can swing around 360° and featured in the Australia film noir movie "The Tender Hook".

All content from Kiddle encyclopedia articles (including the article images and facts) can be freely used under Attribution-ShareAlike license, unless stated otherwise. Cite this article:
Sale, Victoria Facts for Kids. Kiddle Encyclopedia.