Bass Strait is a strait separating the island state of Tasmania from the Australian mainland (more specifically the coast of Victoria, with the exception of the land border across Boundary Islet). The strait provides the most direct waterway between the Great Australian Bight and the Tasman Sea, and is also the only maritime route into the economically prominent Port Phillip Bay.

Formed 8,000 years ago by rising sea levels at the end of the last glacial period, the strait was named after English explorer and physician George Bass (1771-1803) by European colonists.

The International Hydrographic Organization defines the limits of Bass Strait as follows:

On the west. The eastern limit of the Great Australian Bight [being a line from Cape Otway, Australia, to King Island and thence to Cape Grim, the northwest extreme of Tasmania].

On the east. The western limit of the Tasman Sea between Gabo Island and Eddystone Point [being a line from Gabo Island (near Cape Howe, 37°30'S) to the northeast point of East Sister Island (148°E) thence along the 148th meridian to Flinders Island; beyond this Island a line running to the Eastward of the Vansittart Shoals to [Cape] Barren Island, and from Cape Barren (the easternmost point of [Cape] Barren Island) to Eddystone Point (41°S) in Tasmania]. 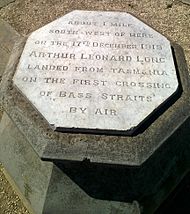 Monument commemorating the first flight across the Bass Strait, by Arthur Leonard Long in 1919. Note the spelling "Straits".

Differing views of location and context

Some authorities consider the strait to be part of the Pacific Ocean as in the never-approved 2002 IHO Limits of Oceans and Seas draft. In the currently in-force IHO 1953 draft, it is instead listed as part of the Indian Ocean.

The Australian Hydrographic Service does not consider it to be part of the Southern Ocean, using the expanded Australian definition, and states that it lies with the Tasman Sea. The strait between the Furneaux Islands and Tasmania is Banks Strait, a subdivision of Bass Strait.

Discovery and exploration by Europeans

The strait was named after George Bass, after he and Matthew Flinders passed through it while circumnavigating Van Diemen's Land (now named Tasmania) in the Norfolk in 1798–99. At Flinders' recommendation, the Governor of New South Wales, John Hunter, in 1800 named the stretch of water between the mainland and Van Diemen's Land "Bass's Straits". Later it became known as Bass Strait.

The existence of the strait had been suggested in 1797 by the master of Sydney Cove when he reached Sydney after deliberately grounding his foundering ship and being stranded on Preservation Island (at the eastern end of the strait). He reported that the strong south westerly swell and the tides and currents suggested that the island was in a channel linking the Pacific and southern Indian Ocean. Governor Hunter thus wrote to Joseph Banks in August 1797 that it seemed certain a strait existed. 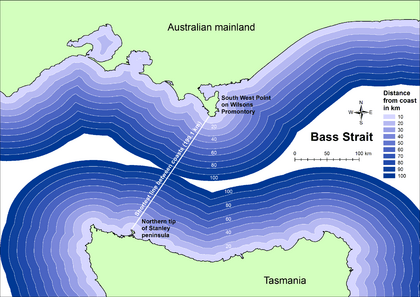 Shortest distance between the coasts of Bass Strait: South West Point on Wilsons Promontory to the northern tip of the Stanley peninsula

Bass Strait is approximately 250 km wide and 500 km long, with an average depth of 60 m. The widest opening is about 350 km between Cape Portland on the North-Eastern tip of Tasmania and Point Hicks on the Australian mainland. Jennings’ study of the submarine topography of Bass Strait described the bathymetric Bass Basin, a shallow depression approximately 120 km wide and 400 km long (>65,000 km2 in area) in the centre of Bass Strait, a maximum depth is the channel between Inner Sister and Flinders, which navigation charts indicate reaches 155 m. Two plateaus, the Bassian Rise and King Island Rise located on the eastern and western margins of Bass Strait, respectively, are composed of a basement of Palaeozoic granite. These features form sills separating Bass Basin from the adjacent ocean basins. Associated with the <50 m deep Bassian Rise is the Furneaux Islands, the largest of which is Flinders Island (max. elevation 760 m). The surface of the King Island Rise also occurs in water depths of <50 m, and includes the shallow (40 m) Tail Bank at its northern margin as well as King Island itself. Subaqueous dunes (sandwaves) and tidal current ridges and subaqueous dunes cover approximately 6,000 km2 of the seabed in Bass Strait.

During Pleistocene low sea level stands the central basin of Bass Strait was enclosed by raised sills forming a large shallow lake. This occurred during the last glacial maximum (18,000 yrs ago), when the basin was completely isolated. Sea level rise during the marine transgression flooded the basin, forming a marine embayment from 11,800 to 8,700 and the basin rim was completely flooded by about 8,000 years BP, at which point Bass Strait was formed and Tasmania became a separate island.

Like the rest of the waters surrounding Tasmania, and particularly because of its limited depth, it is notoriously rough, with many ships lost there during the 19th century. A lighthouse was erected on Deal Island in 1848 to assist ships in the eastern part of the Straits, but there were no guides to the western entrance until the Cape Otway Lighthouse was first lit in 1848, followed by another at Cape Wickham at the northern end of King Island in 1861.

Strong currents between the Antarctic-driven southeast portions of the Indian Ocean and the Tasman Sea's Pacific Ocean waters provide a strait of powerful, wild storm waves. To illustrate its wild strength, Bass Strait is both twice as wide and twice as rough as the English Channel. The shipwrecks on the Tasmanian and Victorian coastlines number in the hundreds, although stronger metal ships and modern marine navigation have greatly reduced the danger.

Many vessels, some quite large, have disappeared without trace, or left scant evidence of their passing. Despite myths and legends of piracy, wrecking and alleged supernatural phenomena akin to those of the Bermuda Triangle, such disappearances can be invariably ascribed to treacherous combinations of wind and sea conditions, and the numerous semi-submerged rocks and reefs within the Straits.

Despite the strait's difficult waters it provided a safer and less boisterous passage for ships on the route from Europe or India to Sydney in the early 19th century. The strait also saved 1,300 km (700 nmi) distance on the voyage. 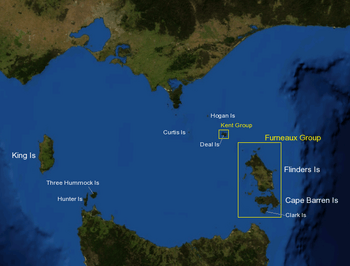 There are over 50 islands in Bass Strait. Major islands include:

The western field, known as the Otway Basin, was discovered in the 1990s offshore near Port Campbell. Its exploitation began in 2005.

The oil and gas is sent via a pipeline to gas processing facilities and oil refineries at Longford, Western Port, Altona and Geelong, as well as by tanker to New South Wales.

The issue of planes, ships and people having been lost in the strait over time has spawned a number of theories. Perhaps the most thorough list of losses and disappearances has been the oft re-printed book of Jack Loney though it is possible that most losses can be adequately explained by extreme weather events.

On the popular Australian soap Neighbours, one of its most dramatic storylines unfolded when a 1940s themed joy flight to Tasmania was sabotaged by a bomb. The plane crashed into Bass Strait in the middle of the night and many character's lives were put at risk, with some drowning.

In 1978, one of the most famous UFO incidents in Australian history occurred over Bass Strait. Frederick Valentich was flying a small aeroplane over the strait when he reported to personnel at a local airport that a strange object was buzzing his plane. He then claimed that the object had moved directly in front of his plane; the airport personnel then heard a metallic "scraping" sound, followed by silence. Valentich and his plane subsequently vanished and neither Valentich nor his plane were ever seen again.

Bass Strait is regularly crossed by sailing vessels, including during the annual Melbourne to Hobart Yacht Race. The Sydney to Hobart Yacht Race passes generally east of the strait but is affected by its weather conditions. Australian Olympic bronze medalist Michael Blackburn set a record in October 2005 when he crossed the strait in just over 13 hours in a Laser sailing dinghy.

Lone rower David Bowen (Mt Martha) crossed Bass Strait in 1971 rowing a 20' dory, leaving from Devonport he landed on Wilson's Promontory. Tammy van Wisse swam part of the strait in 1996, from King Island to Apollo Bay in Victoria, a distance of about 100 km in 17 hours and 46 minutes. Rod Harris, Ian and Peter Richards are credited with the first kayak crossing in 1971. Many sea kayakers have since made the crossing, usually by island hopping on the eastern side of the strait. Fewer sea kayak crossings have been made via King Island, due to the 100 km leg between Cape Wickam and Apollo Bay. Andrew McAuley was the first person to cross Bass Strait non-stop in a sea kayak in 2003. He made two more crossings of Bass Strait before he died attempting to cross the Tasman Sea in February 2007. The first windsurfer crossing was in 1982 by Mark Paul and Les Tokolyi. Kitesurfers have also completed the crossing. The first crossing by paddleboard was made by Jack Bark, Brad Gaul and Zeb Walsh, leaving Wilsons Promontory in Victoria on 25 February 2014 and arriving at Cape Portland in Tasmania's north-east on 4 March 2014. 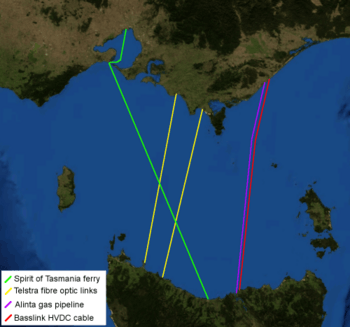 The fastest and often the cheapest method of travel across Bass Strait is by air. The major airports in Tasmania are Hobart International Airport and Launceston Airport, where the main airlines are Jetstar and Virgin Australia. Qantas also operates services. The smaller airports in the north of the state and on the islands in the strait are served either by Regional Express Airlines, QantasLink or King Island Airlines.

The domestic sea route is serviced by two Spirit of Tasmania passenger vehicle ferries, based in Devonport, Tasmania. The ships travel daily in opposite directions between Devonport and Station Pier in Melbourne as overnight trips, with additional daytime trips during the peak summer season.

The Basslink HVDC electrical cable has been in service since 2006. It has the capacity to carry up to 630 megawatts of electrical power across the strait. 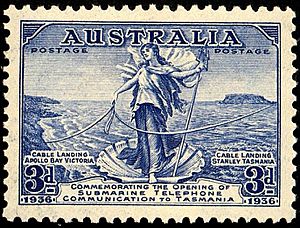 The first submarine communications cable across Bass Strait was laid in 1859. Starting at Cape Otway, Victoria, it went via King Island and Three Hummock Island, made contact with the Tasmanian mainland at Stanley Head, and then continued on to George Town. However it started failing within a few weeks of completion, and by 1861 it failed completely.

Tasmania is currently connected to the mainland via two Telstra-operated fibre optic cables; since 2006, dark fibre capacity has also been available on the Basslink HVDC cable.

Other submarine cables include:

All content from Kiddle encyclopedia articles (including the article images and facts) can be freely used under Attribution-ShareAlike license, unless stated otherwise. Cite this article:
Bass Strait Facts for Kids. Kiddle Encyclopedia.