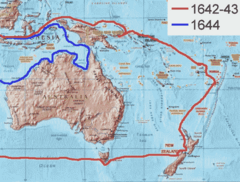 Abel Janszoon Tasman (1603–1659) was a Dutch sea explorer. He found Tasmania and New Zealand while on voyages in 1642 and 1644, in the service of the VOC (Dutch East India Company). He also made the first historical sightings of large parts of Australia.

He was born in Groningen, Holland. He went to Batavia (now called Jakarta) to work for the VOC in 1633. He went back to Holland in 1636. He went back to Batavia with his wife, Jannetie Tjaerss, two years later. He went north to Japan in 1640. In 1642 Tasman went south to Palembang.

Tasman set Governor General of the Dutch East Indies. Tasman sailed around to the east coast of Van Diemen's Land and claimed the land for the Dutch on December 3, 1642. The ships then sailed west and found New Zealand. His ships were attacked by Maori in large war canoes (boats) and four sailors died. Tasman then sailed north-east to Tonga and Fiji. He then sailed north west to New Guinea and got back to Batavia in June 1643.

In 1644 Tasman sailed from Batavia with the ships Limmen, Zeemeeuw and Bracq. He sailed along the west coast of New Guinea, and then the coast of Australia from Cape York to North West Cape. He went back to Batavia in August 1644. He showed that Western Australia and Queensland were part of the same country. He was not able to get through Torres Strait, but his maps were used for the next 200 years. Tasman made more trips including to Sumatra in 1646, Siam in 1647, and Manila in 1648. He purchased a lot of land in Batavia where he died in October 1659.

Several places have been named after him, including Tasmania, the Tasman Peninsula, Tasman Island and the Tasman Sea.

All content from Kiddle encyclopedia articles (including the article images and facts) can be freely used under Attribution-ShareAlike license, unless stated otherwise. Cite this article:
Abel Tasman Facts for Kids. Kiddle Encyclopedia.