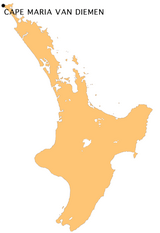 The cape was named by Abel Tasman, (first European explorer to discover New Zealand) after the wife of his patron, Anthony van Diemen, Governor General of Batavia (now Jakarta) in January 1643, on the same voyage of discovery during which he named Van Diemen's Land (now Tasmania). It is - along with the Three Kings Islands - one of only two geographic features in New Zealand to retain the names given to them by Tasman.

Cape Maria van Diemen normally has a subtropical climate, but it is the most northerly part of New Zealand in which snowfall has been reported.

All content from Kiddle encyclopedia articles (including the article images and facts) can be freely used under Attribution-ShareAlike license, unless stated otherwise. Cite this article:
Cape Maria van Diemen Facts for Kids. Kiddle Encyclopedia.