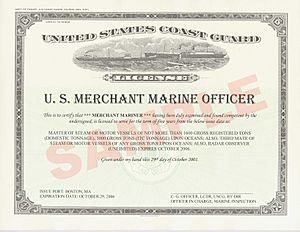 A ship's captain must have a number of qualifications, including a license.

A sea captain, ship's captain, captain, master, or shipmaster, is a high-grade licensed mariner who holds ultimate command and responsibility of a merchant vessel. The captain is responsible for the safe and efficient operation of the ship—​including its seaworthiness, safety and security, cargo operations, navigation, crew management, and legal compliance—​and for the persons and cargo on board.

The captain ensures that the ship complies with local and international laws and complies also with company and flag state policies. The captain is ultimately responsible, under the law, for aspects of operation such as the safe navigation of the ship, its cleanliness and seaworthiness, safe handling of all cargo, management of all personnel, inventory of ship's cash and stores, and maintaining the ship's certificates and documentation.

One of a shipmaster's particularly important duties is to ensure compliance with the vessel's security plan, as required by the International Maritime Organization's ISPS Code. The plan, customized to meet the needs of each individual ship, spells out duties including conducting searches and inspections, maintaining restricted spaces, and responding to threats from terrorists, hijackers, pirates, and stowaways. The security plan also covers topics such as refugees and asylum seekers, smuggling, and saboteurs.

On ships without a purser, the captain is in charge of the ship's accounting. This includes ensuring an adequate amount of cash on board, coordinating the ship's payroll (including draws and advances), and managing the ship's slop chest.

On international voyages, the captain is responsible for satisfying requirements of the local immigration and customs officials. Immigration issues can include situations such as embarking and disembarking passengers, handling crew members who desert the ship, making crew changes in port, and making accommodations for foreign crew members. Customs requirements can include the master providing a cargo declaration, a ship's stores declaration, a declaration of crew members' personal effects, crew lists and passenger lists.

The captain has special responsibilities when the ship or its cargo are damaged, when the ship causes damage to other vessels or facilities. The master acts as a liaison to local investigators and is responsible for providing complete and accurate logbooks, reports, statements and evidence to document an incident. Specific examples of the ship causing external damage include collisions with other ships or with fixed objects, grounding the vessel, and dragging anchor. Some common causes of cargo damage include heavy weather, water damage, pilferage, and damage caused during loading/unloading by the stevedores.

All persons on board including public authorities, crew, and passengers are under the captain's authority and are his or her ultimate responsibility, particularly during navigation. In the case of injury or death of a crew member or passenger, the master is responsible to address any medical issues affecting the passengers and crew by providing medical care as possible, cooperating with shore-side medical personnel, and, if necessary, evacuating those who need more assistance than can be provided on board the ship.

All content from Kiddle encyclopedia articles (including the article images and facts) can be freely used under Attribution-ShareAlike license, unless stated otherwise. Cite this article:
Sea captain Facts for Kids. Kiddle Encyclopedia.