Edward John "E. J." Smith (27 January 1850 – 15 April 1912) was an English sea captain. He was the captain of the R.M.S Titanic, which sank when it struck an iceberg. Smith was to retire after the maiden voyage of the Titanic, but he died when the ship sank.

Edward John Smith was born on 27 January 1850 on Well Street, Hanley, Staffordshire, England to Edward Smith, a potter, and Catherine Hancock, born Marsh, who married on 2 August 1841 in Shelton, Staffordshire. His parents later owned a shop.

Smith attended the Etruria British School until the age of 13 when he left and operated a steam hammer at the Etruria Forge. In 1867, aged 17 he went to Liverpool in the footsteps of his half-brother Joseph Hancock, a captain on a sailing ship. He began his apprenticeship on Senator Weber, owned by A Gibson & Co. of Liverpool.

Edward Smith joined the White Star Line in March 1880 as the Fourth Officer of SS Celtic. He served aboard the company's liners to Australia and to New York City, where he quickly rose in status. In 1887, he received his first White Star command, the Republic. In 1888, Smith earned his Extra Master's Certificate and joined the Royal Naval Reserve, receiving a commission as a Lieutenant, which entitled him to add the letters "RNR" after his name. This meant that in a time of war he could be called upon to serve in the Royal Navy. Smith retired from the RNR in 1905 with the rank of Commander. His ship had the distinction of being able to fly the Blue Ensign of the RNR; British merchant vessels generally flew the Red Ensign. 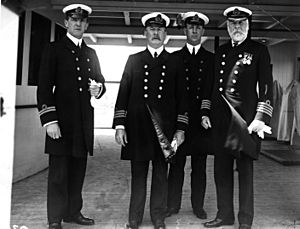 Smith was Majestic's captain for nine years commencing in 1895. When the Boer War started in 1899, Majestic was called upon to transport troops to Cape Colony. Smith made two trips to South Africa, both without incident, and in 1903, for his service, King Edward VII awarded him the Transport Medal, showing the "South Africa" clasp. Smith was regarded as a "safe captain". As he rose in seniority, he gained a following amongst passengers with some only sailing the Atlantic on a ship he captained.

Smith even became known as the "Millionaires' Captain". From 1904 on, Smith commanded the White Star Line's newest ships on their maiden voyages. In 1904, he was given command of what was then the largest ship in the world, the Baltic. Her maiden voyage from Liverpool to New York, sailing 29 June 1904, went without incident. After three years with Baltic, Smith was given his second new "big ship," the Adriatic. Once again, the maiden voyage went without incident. During his command of Adriatic, Smith received the long service Decoration for Officers of the Royal Naval Reserve (RD).

As one of the world's most experienced sea captains, Smith was called upon to take first command of the lead ship in a new class of ocean liners, the Olympic – again, the largest vessel in the world at that time. The maiden voyage from Southampton to New York was successfully concluded on 21 June 1911, but as the ship was docking in New York harbour, a small incident took place. Docking at Pier 59 under the command of Captain Smith with the assistance of a harbour pilot, Olympic was being assisted by twelve tugs when one got caught in the backwash of Olympic, spun around, collided with the bigger ship, and for a moment was trapped under Olympic's stern, finally managing to work free and limp to the docks.

On 20 September 1911, Olympic's first major mishap occurred during a collision with a British warship, HMS Hawke, in which the warship lost her prow. Although the collision left two of Olympic's compartments filled and one of her propeller shafts twisted, she was able to limp back to Southampton. At the resultant inquiry, the Royal Navy blamed Olympic, finding that her massive size generated a suction that pulled Hawke into her side. Captain Smith had been on the bridge during the events.

The Hawke incident was a financial disaster for White Star, and the out-of-service time for the big liner made matters worse. Olympic returned to Belfast and, to speed up the repairs, Harland and Wolff was forced to delay Titanic's completion in order to use one of her propeller shafts and other parts for Olympic. Back at sea in February 1912, Olympic lost a propeller blade and once again returned for emergency repairs. To get her back to service immediately, Harland and Wolff again had to pull resources from Titanic, delaying her maiden voyage from 20 March to 10 April.

When the Titanic struck the iceberg, Smith knew within minutes that the ship was doomed and that people would die. During the evacuation, Captain Smith did all in his power to prevent panic and did his best to assist in the evacuation; Major Arthur Godfrey Peuchen of the Royal Canadian Yacht Club said "He was doing everything in his power to get women in these boats, and to see that they were lowered properly. I thought he was doing his duty in regard to the lowering of the boats". Robert Williams Daniel, a first class passenger also said:

Captain Smith was the biggest hero I ever saw. He stood on the bridge and shouted through a megaphone, trying to make himself heard.':

Just minutes before the ship started its final plunge, Smith was still busy releasing Titanic's crew from their duties; he went to the Marconi operators room and released Junior Marconi Officer Harold Bride and senior wireless operator John "Jack" Phillips from their duties. He then carried out a final tour of the deck, telling crew members: "Now it's every man for himself." Steward Edward Brown saw the captain approach with a megaphone in his hand. He heard him say "Well boys, do your best for the women and children, and look out for yourselves.” He saw the Captain walk onto the bridge alone just seconds before the ship took its final plunge. This was the last reliable sighting of Smith. Just seconds later Trimmer Samuel Hemming found the bridge apparently empty.

Smith died that night along with around 1,500 others, and his body was never recovered.

There are conflicting accounts of his death; Some claimed to have seen Smith in the water swimming towards a lifeboat, or near the capsized collapsible lifeboat "B", other accounts describe him entered the wheelhouse on the bridge and died there when it was engulfed. The actual fate of captain Smith will probably remain uncertain. His body was never recovered. 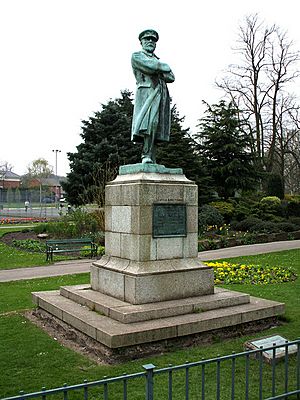 A statue, sculpted by Kathleen Scott, wife of Antarctic explorer Robert Falcon Scott, was unveiled in July 1914 at the western end of the Museum Gardens in Beacon Park, Lichfield. The pedestal is made from Cornish granite and the figure is bronze. Lichfield was chosen as the location for the monument because Smith was a Staffordshire man and Lichfield was the centre of the diocese. The statue originally cost £740 (£50,000 with inflation2018) raised through local and national contributions.

For his stoicism and stiff upper lip self-discipline, fortitude and remaining calm in the face of adversity, which popular culture rendered into a British character trait, the plaque below his memorial statue states, "bequeathing to his countrymen, the memory [and] example of a great heart, a brave life and a heroic death, 'be British.'"

In 2010, as part of the "Parks for People" programme, the statue was restored and the green patina removed from its surface at a cost of £16,000. In 2011 an unsuccessful campaign was started to get the statue moved to Captain Smith's home town of Hanley.

Smith had already been commemorated in Hanley's Town Hall with a plaque reading: "This tablet is dedicated to the memory of Commander [sic] Edward John Smith RD, RNR. Born in Hanley, 27th Jany 1850, died at sea, 15th April 1912. Whilst in command of the White Star SS Titanic that great ship struck an iceberg in the Atlantic Ocean during the night and speedily sank with nearly all who were on board. Captain Smith having done all man could do for the safety of passengers and crew remained at his post on the sinking ship until the end. His last message to the crew was 'Be British.'"

The plaque was removed in 1961, given to a local school and then returned to the Town Hall but remounted in the interior of the building in 1978. The Titanic Brewery in Burslem, Stoke-on-Trent is in honour of him.

Smith's mother, Catherine Hancock, lived in Runcorn, Cheshire, where Smith himself intended to retire. She died there in 1893. Smith's half-sister Thyrza died in 1921 and his widow, Sarah Eleanor Smith, was hit and killed by a taxi in London in 1931. Their daughter, Helen Melville, married and gave birth to twins, Simon and Priscilla. Simon, a pilot in the Royal Air Force, was killed in World War II. Priscilla died from polio three years later; neither of them had children. Helen died in 1973.

All content from Kiddle encyclopedia articles (including the article images and facts) can be freely used under Attribution-ShareAlike license, unless stated otherwise. Cite this article:
Edward J. Smith Facts for Kids. Kiddle Encyclopedia.