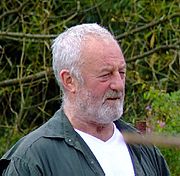 Bernard Hill (born 17 December 1944) is a British movie, theatre, and television actor since 1975. His career has lasted more than 30 years.

Hill is known for playing Yosser Hughes in the British television drama Boys from the Blackstuff. He is also known for the roles in movie blockbusters films such as Captain Edward Smith in Titanic, King Theoden in The Lord of the Rings movie series, and as the Warden of the San Quentin Prison in Clint Eastwood's True Crime.

Hill was born in Blackley, Manchester, England in 17 December 1944. He attended at Xaverian College although back then it was called The Xaverian School, and then to the Manchester Polytechnic School of Drama at the same time as Richard Griffiths. He graduated with a diploma in theatre in 1970.

He is married to Marianne Hill and has a son named Gabriel Hill.

In his commentary on The Lord of the Rings: The Two Towers (2002) Extended Edition DVD, he admits that during the course of shooting he first broke his sternum, then had his ear slashed open by a sword.

All content from Kiddle encyclopedia articles (including the article images and facts) can be freely used under Attribution-ShareAlike license, unless stated otherwise. Cite this article:
Bernard Hill Facts for Kids. Kiddle Encyclopedia.