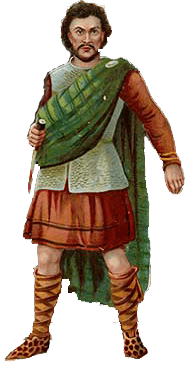 Macbeth is a main character and antagonist in the play Macbeth by William Shakespeare. He was the Thane of Cawdor. He would eventually kill the King of Scotland Duncan so that he can become king. His wife, Lady Macbeth makes him kill the king. He then eventually kills his friend Banquo and Macduff's family. He is eventually killed by Macduff.

Macbeth is a very single-minded character, who was tempted by the power the witches' offered him and soon became the most hated man in Scotland.

All content from Kiddle encyclopedia articles (including the article images and facts) can be freely used under Attribution-ShareAlike license, unless stated otherwise. Cite this article:
Macbeth (character) Facts for Kids. Kiddle Encyclopedia.