Théodore Chassériau (September 20, 1819 – October 8, 1856) was a French romantic painter noted for his portraits, historical and religious paintings, and images inspired by his travels to Algeria. 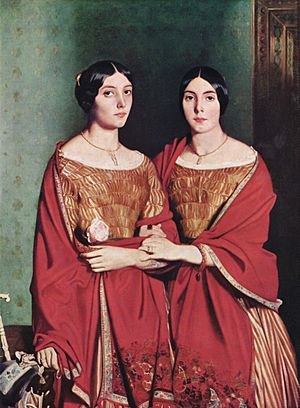 Chassériau was born in El Limón, Samaná, in Saint Domingue (now the Dominican Republic). Her mother, Maria Magdalena Couret de la Blagniére, was born in Haiti but she moved with her parents to Santo Domingo when the Haitian revolution. At that time, the eastern part of Hispaniola was a French colony. There she met Bénoit Chassériau and soon they got married and moved to Samaná.

When the eastern part of the Hispaniola became again a colony of Spain, the family moved to Venezuela and Jamaica. Then, in 1821, the family went to live in Paris, France. Théodore was three years old at that time.

In 1830, at the age of eleven, he started to study with Jean-Auguste-Dominique Ingres, and soon he became the favorite pupil of the great classicist.

After Ingres left Paris in 1834 to become director of the French Academy in Rome, Chassériau fell under the influence of Eugène Delacroix, a well-known romantic painter. From that moment on, Chassériau tried to combine the two styles.

His works could be grouped in two periods:

Théodore Chassériau exhibition at the Metropolitan Museum of Art [1] Retrieved on 2007-10-03.

All content from Kiddle encyclopedia articles (including the article images and facts) can be freely used under Attribution-ShareAlike license, unless stated otherwise. Cite this article:
Théodore Chassériau Facts for Kids. Kiddle Encyclopedia.