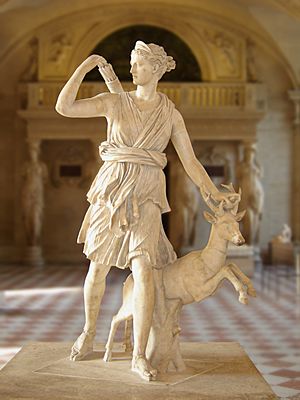 Diana of Versailles is a statue of Diana that is now in the Louvre in Paris. This statue dates from the first or second century. It may have been modelled on an older statue of the Greek period.

In Roman mythology, Diana was the goddess of hunting, and in later times, the moon and chastity. Cypress trees were sacred to her. She was the daughter of Jupiter and the Titan Latona (or Leto). In Greek mythology, Diana was called Artemis. She is also associated with fertility and nature. Artemis is her Greek equivalent.

According to mythology Diana was born with her twin brother Apollo on the island of Delos. Apollo was her only real brother but she had many half brothers and sisters from her father. Her half-siblings were Vulcan, Minerva, Mercury, Bacchus, Mars, and Proserpine. Diana made a group of three with two other Roman deities: Egeria the water nymph, her servant and midwife helper; and Virbius, the god of the woods. Diana is a maiden goddess which means she can't marry.

All content from Kiddle encyclopedia articles (including the article images and facts) can be freely used under Attribution-ShareAlike license, unless stated otherwise. Cite this article:
Diana (mythology) Facts for Kids. Kiddle Encyclopedia.