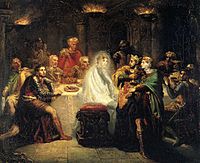 Banquo is a character in William Shakespeare's 1606 play Macbeth. He was a friend of the play's villain Macbeth. Banquo was the thane of Lochaber. He was killed by murderers hired by Macbeth so that he doesn't get in the way of Macbeth's reign as king. His son, Fleance was with him during the attack and lives.

All content from Kiddle encyclopedia articles (including the article images and facts) can be freely used under Attribution-ShareAlike license, unless stated otherwise. Cite this article:
Banquo Facts for Kids. Kiddle Encyclopedia.