John Rhys-Davies (born 5 May 1944) is a Welsh actor and voice actor known for his portrayal of Gimli in The Lord of the Rings trilogy and the charismatic excavator Sallah in the Indiana Jones films. He also played Agent Michael Malone in the 1993 remake of the 1950s television series The Untouchables.

Additionally, he provided the voices of Cassim in Disney's Aladdin and the King of Thieves, Macbeth in Gargoyles, Man Ray in SpongeBob SquarePants, Hades in Justice League and Tobias in the computer game Freelancer. 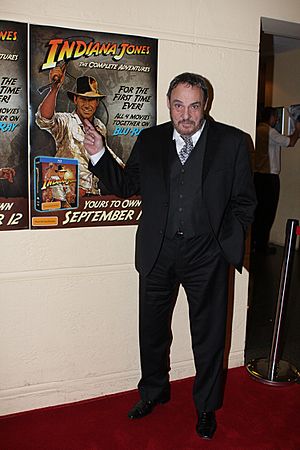 All content from Kiddle encyclopedia articles (including the article images and facts) can be freely used under Attribution-ShareAlike license, unless stated otherwise. Cite this article:
John Rhys-Davies Facts for Kids. Kiddle Encyclopedia.