Justice League is an American animated television series which ran from 2001 to 2004 on Cartoon Network. It is the seventh series of the DC Animated Universe. The show was produced by Warner Bros. Animation. It is based on the Justice League of America and associated comic book characters published by DC Comics. It serves as a prequel to Batman Beyond and as a sequel to Batman: The Animated Series, Superman: The Animated Series and The New Batman Adventures. After two seasons, the series was rebranded as Justice League Unlimited, a successor series which aired for three seasons.

According to audio commentary on the DVD release of Season 2, the second-season finale "Starcrossed" was expected to be the final episode of the series. However, in February 2004, Cartoon Network announced a follow-up series, Justice League Unlimited, which premiered on July 31, 2004 and featured a larger roster of characters.

Kevin Conroy reprised his voice role as Batman from Batman: The Animated Series (1992–1995), The New Batman Adventures (1997–1999), and Batman Beyond (1999–2001). Batman's costume was redesigned, but this time, his costume was a combination of his last three costumes. The same costume from The New Batman Adventures is retained, but with the blue highlights from the Batman: The Animated Series costume and the long-ears from the Batman Beyond costume are added to the costume. Tim Daly, who voiced Superman in Superman: The Animated Series (1996–2000) was initially involved but was unable to continue his role due to involvement with The Fugitive (a short-lived remake of the original 1963 TV series), and was replaced by George Newbern. Superman was initially redesigned to have a bit of a squint to his eyes and slight wrinkles that was also meant to make him look older, in addition to having a noticeable shining streak to his hair; he was redesigned to appear larger in physical girth than in the previous series. Fans did not like the older appearance and in the second season the streak was toned down to the point of almost disappearing and the squint was removed, in essence reverting Superman to his earlier animated look. As an in-joke, Superman's season one facial designs are used for an older Jor-El in the Justice League Unlimited episode "For the Man Who Has Everything". 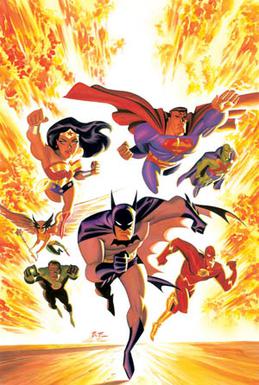 Most of the characters retained their general comic book origins and continuity, with Wonder Woman being the notable exception. In the Justice League series continuity, the premiere story arc "Secret Origins" revises the plot of Diana's competition against her fellow Amazons to be the ambassador of peace to man's world, and she is referred to as a "rookie" superhero during her first encounter with the League. (Subsequent episodes touched on her attempts to adjust to her new world). In an interview segment on the Season One DVD, Bruce Timm stated that he initially ran into some legal issues in using the Wonder Woman character, but was adamant that she be used in the series. Additionally, the character of The Flash was portrayed as somewhat younger and significantly more brash than his comic book counterpart, taking on a number of personality traits of Plastic Man, who provides a similar comic relief function in the JLA comics. Charlie Schlatter, who voiced the Flash in one episode of Superman: The Animated Series, was unavailable to reprise the role and was replaced by Michael Rosenbaum. Major changes were also made to the Hawkgirl character. The character of Hawkgirl became romantically involved with the John Stewart Green Lantern as the series progressed. A romantic relationship between Batman and Wonder Woman was also "shown" (hinted at but never "official" unlike Hawkgirl/Green Lantern) by the show's creators, who disliked pairing Wonder Woman with Superman despite fan requests. Robin is not paired with Batman in this animated series like he was on Super Friends. Although the series itself is animated in traditional 2-dimensional style, the opening credits are rendered in 3D with toon shading. The intro is a "stock" intro used throughout the series until Justice League Unlimited premieres.

From 2006 to 2011, Warner Home Entertainment (via DC Entertainment and Warner Bros. Family Entertainment) released the entire series of Justice League on DVD and Blu-ray, and presented in original broadcast version and story arc continuity order.

A 4-disc soundtrack of musical highlights from both seasons of Justice League was released by La-La Land Records in July 2016. It is a limited edition of 3000 units and can be ordered at the La-La Land Records website. The set includes tracks from fan-favorite episodes like A Better World, Hereafter, Wild Cards and Starcrossed.

La-La Land are hoping to release a soundtrack for Justice League Unlimited as well, provided that sales of the Justice League soundtrack improve significantly and that there is sufficient demand from fans. A second Justice League volume may also follow if fans support the existing release.

Circa 2004, Bruce Timm announced that a direct-to-video Justice League feature film was in the works. The film was intended to make a bridge between the second season of Justice League to the first season of Justice League Unlimited. The film was planned to reveal how Wonder Woman acquired her Invisible-Jet, and also planned to feature the Crime Syndicate as the main antagonists, an idea that was originally conceived for the two-part episode "A Better World", until the Syndicate was replaced by the Justice Lords. Dwayne McDuffie wrote the script and Andrea Romano assembled the cast, but Warner Bros. finally scrapped the project. However, in 2010, the film's plot was used for the non-DCAU film Justice League: Crisis on Two Earths, but removing all references to the continuity of the DC animated universe, and replacing John Stewart with Hal Jordan as the Justice League's Green Lantern.

DC Comics published a series of 34-issue numbered comics based on the television series, between 2002 and 2004.

All content from Kiddle encyclopedia articles (including the article images and facts) can be freely used under Attribution-ShareAlike license, unless stated otherwise. Cite this article:
Justice League (TV series) Facts for Kids. Kiddle Encyclopedia.