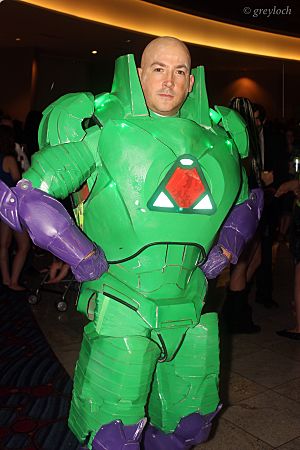 Lex Luthor (full name: Alexander Joseph Luthor) is a fictional supervillain from the comic books published by DC Comics. He is the biggest enemy of Superman. He is also an enemy of Batman and other superheroes in the DC Comics. The character was created by writer Jerry Siegel and artist Joe Shuster. He first appeared in Action Comics #23 (April 1940). He has been adapted into movies, tv shows and video games as well. Several actors have played Lex Luthor in motion pictures as well as in TV shows such as Lyle Talbot, Gene Hackman, Clancy Brown, Michael Rosenbaum, Kevin Spacey, Jesse Eisenberg and Jon Cryer.

All content from Kiddle encyclopedia articles (including the article images and facts) can be freely used under Attribution-ShareAlike license, unless stated otherwise. Cite this article:
Lex Luthor Facts for Kids. Kiddle Encyclopedia.