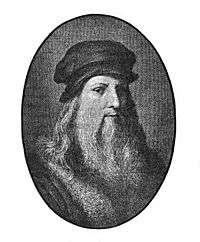 Leonardo da Vinci was one of the world’s most famous geniuses and a polymath.

A genius is a person who is exceptionally intelligent. People may have different ideas of how clever one has to be in order to be called a “genius”. A genius may be extremely clever at maths or science or games such as chess, or they may be creative geniuses who are brilliant writers, musicians or artists.

Albert Einstein is perhaps the world’s most famous genius. He was extraordinarily good at math, but in other areas, such as languages, he was not particularly good. Leonardo da Vinci and Johann Wolfgang von Goethe were geniuses who can also be described as polymaths because they were brilliant in lots of different subjects. Geniuses are usually child prodigies, i.e., they already show they are a genius when they are young children.

Genius is not quite the same as talent. Talent means the ability to learn a particular skill very quickly. A genius, on the other hand, is also very creative and able to do things that no one else has thought of.

Some geniuses, such as Goethe, are very sensible, reliable people who are good at organizing their lives. However, there are many geniuses who have unusual personalities. They may be very absent-minded, they may not have much common sense, or they may suffer at times from depression and changes of mood.

All content from Kiddle encyclopedia articles (including the article images and facts) can be freely used under Attribution-ShareAlike license, unless stated otherwise. Cite this article:
Genius Facts for Kids. Kiddle Encyclopedia.