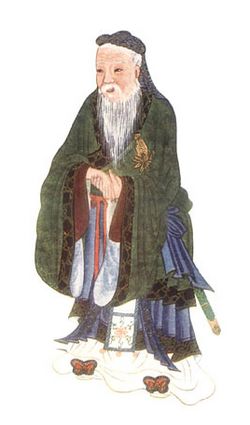 Confucius (born 551 BC, died 479 BC) was an important Chinese educator and philosopher. His original name was Kong Qiu or Zhong Ni. As a child, he was eager to learn about everything, and was very interested in rituals. Once he grew up, he worked as a state official who handled farms and cattle. Then he became a teacher.

Confucius lived in a time when many states were fighting wars in China. This period was called the Spring and Autumn period of the Zhou Dynasty. Confucius did not like this and wanted to bring order back to society.

Like Socrates, Confucius sometimes did not answer philosophical questions himself. Instead he wanted people to think hard about problems and to learn from others, especially from history. Confucius also thought that people should get power because they were good and skilled, and not just because they came from powerful families.

Confucius wanted people to think about other people more than about money or what they owned. However he also felt that there should be strong rules in society and that people needed to obey them. Confucius thought that there were five relationships people could have, and that they all had their own rules. Two people could be

These were traditional relationships called the 'five prototypes'. Confucius said that in all these relationships, both people must obey rules. For example, a subject must obey a prince, but also a prince must listen to a subject and must rule him well and fairly.

Confucius said that people should only do things to other people if they would be okay with other people doing those things to themselves. This is sometimes called the Golden Rule and was also taught by Jesus Christ.

His students wrote down small stories about him, and things that he said. These were put together to make a book called The Analects, which became one of the main books of Confucianism.

All content from Kiddle encyclopedia articles (including the article images and facts) can be freely used under Attribution-ShareAlike license, unless stated otherwise. Cite this article:
Confucius Facts for Kids. Kiddle Encyclopedia.